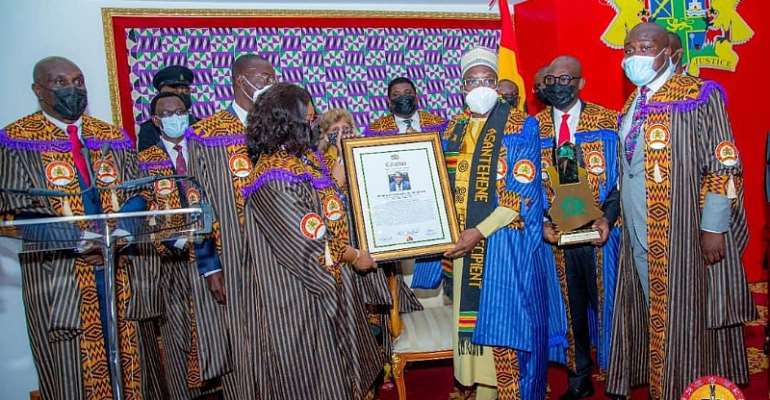 Speaker receives his citation on the floor of Parliament

The Speaker of Parliament, Rt. Hon. Alban Sumana Kingsford Bagbin has received the 2021 coveted Parliamentarian of the Decade Award.

He was awarded for his outstanding contribution to the growth of national development, sustenance of parliamentary democracy and good governance since the inception of the country’s Fourth Republican Parliament.

The accolade was conferred on the veteran politician and astute lawmaker who has been in Parliament since the advent of the 4th Republic and has served virtually in all positions available in the House by the Millennium Excellence Foundation (MEF) at a Special Sitting of Parliament on Monday, July 26, 2021.

The Millennium Excellence Awards was established as a non-profit organization to celebrate successful enterprises in Africa by Ashim Morton, an Architect by profession and Entrepreneur who returned to Ghana after several years in the United States to give his quota to the development of his Nation.

As a witness to the constant negative outlook and poor governance stories coming out of the African Continent daily, Ashim Morton, the great-grandson of the Asantehene Otumfuo Prempeh I and son of Dr. Titus Aruna Morton, made it a decision to tell the successful enterprises and highlight individuals who were selflessly bringing about change in Ghana.

Now in their 20th year, the awards are organised by the Millennium Excellence Foundation to celebrate outstanding personalities championing key development initiatives in Leadership, Governance, and Entrepreneurship Africa

The Foundation focuses most of its resources in three key areas, Agriculture and Food Security, Water, Sanitation and Hygiene and Science, Innovation and Technology.

It aligns also its objectives with the Sustainable Development Goals (SDGs) to reduce poverty, ensure accountability in Governance in key areas of attention that will lead to sustainable growth and development for the citizens of Africa.

The Millennium Excellence Awards is hosted once every five years and recognize institutions and individuals for their contribution to national development and the ceremonies are privately funded by corporate bodies and individuals who believed in Ashim’s vision.

The 2021 edition of the Millennium Excellence Awards was held on July 17th, 2021 at a ceremony in the Manhyia Palace, Kumasi where over sixty distinguished personalities and corporate bodies were honoured.

In attendance was the President Nana Addo Dankwa Akufo-Addo who was honoured with the Gold Award for his good leadership, national cohesion and political stability in Ghana while music maestro Kojo Antwi who was also awarded for his immense contribution to the music industry of Ghana entertained guests with some lively tunes throughout the night.

The Rt. Hon. Speaker Alban Sumana Kingsford Bagbin in his acceptance speech thanked the President, Board of Governors, and Advisory Technical team and programme managers for the honour bestowed on him promised to uphold the high tenets and principles of parliamentary democratic proceedings.

He stated that though a Speaker from the Opposition party in a hung Parliament, he will not frustrate the Executive arm of Government with which he has already established a healthy working relationship as well as the Judiciary.

His Royal Majesty, the Asantehene Nana Otumfuo Osei Tutu II is the Life Patron of the Foundation and together with the founder Ashim ensures the sustainability of its mission and goal to drive the principles of sustainable development in Ghana and Africa.