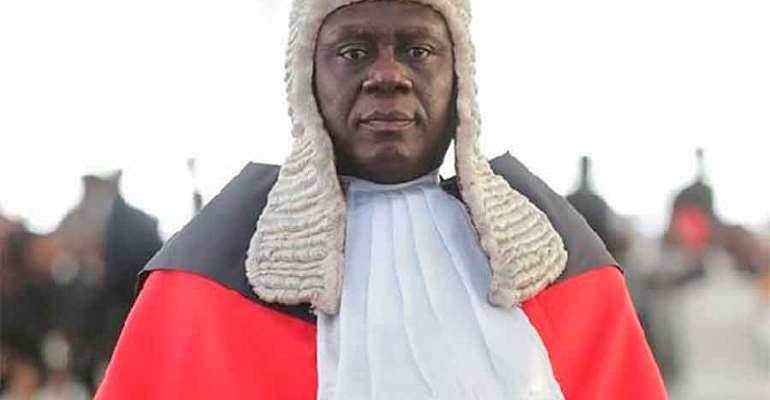 The National Democratic Congress (NDC) wants Chief Justice Kwasi Anin-Yeboah to step aside for investigations into the $5 million bribery allegation against him to be carried out.

The name of the country’s CJ has been in the news for the wrong reasons these last few days on the back of damning allegations made against him by Lawyer Akwasi Afrifa Esq.

According to the lawyer, his client whose case he was conducting had informed him that the Chief Justice demanded a bribe of USD$5 million to fix the verdict of a case before the Supreme Court.

Justice Kwasi Anin-Yeboah has denied the allegation and directed the Criminal Investigations Department (CID) of the Ghana Police Service to look into the matter but the NDC insists that more must be done.

At a press conference in Accra on Tuesday, July 13, 2021, General Secretary of the main opposition party, Johnson Asiedu Nketiah has indicated that it is prudent the Chief Justice steps aside for investigations to be carried out.

“Best practice would require that the Chief Justice steps aside temporarily until the matters are looked into and a clear outcome emerges and we believe this instance calls for such an action,” the outspoken scribe told journalists at the press conference.

The NDC insists that due to the considerable public interest involved in the matter, another effective and transparent approach in the circumstance would be a full-blown public inquiry.

On that front, the umbrella party wants Commission on Human Rights and Administrative Justice (CHRAJ) to be in charge of the Inquiry.

"Conversely, CHRAJ, which has an enviable reputation of looking into similar cases of alleged corruption against highly placed state and government officials would be better placed to conduct such a serious inquiry," Mr. Nketiah added.

Find below the full speech read by Asiedu Nketiah at today’s press conference:

SPEECH DELIVERED BY HON. JOHNSON ASIEDU NKETIA, GENERAL SECRETARY OF THE NATIONAL DEMOCRATIC CONGRESS ON ACCUSATIONS OF BRIBERY AGAINST THE CHIEF JUSTICE OF THE REPUBLIC OF GHANA.

Good afternoon Ladies and Gentlemen of the media. Let me welcome you to this urgent encounter at which we intend to share our thoughts on a matter of grave national importance.

In the last few days, we have learnt about damning allegations made against the Chief Justice of the Republic of Ghana, His Lordship Justice Kwasi Anin-Yeboah, by a prominent Lawyer, Akwasi Afrifa Esq., to the effect that his client whose case he was conducting had informed him that the Chief Justice demanded a bribe of USD$5 million to fix the verdict of a case before the Supreme Court. He also alleges that the Chief Justice demanded the replacement of he Akwasi Afrifa with Akoto Ampaw Esq. as Lawyer in the case as a precondition for ensuring victory in the case for his client.

We have also taken notice of a denial by the Chief in question, Nana Ogyeedom Obranu Kwesi Atta VI and the Chief Justice of the said allegations and the subsequent request of the latter for investigations into the matter by the CID of the Ghana Police Service.

Distinguished friends from the media, the allegations made against the Chief Justice are very grave and rock the very foundations of the Judiciary, which is an indispensable and independent arm of government. Any suggestion that the head of such an institution has sought to compromise his office to undermine the integrity of judgements made by the courts, warrants the most serious attention. This is because any doubts harbored over the integrity of the Judiciary and its leadership, has the potential to completely erode public confidence in the administration of justice in Ghana and our governance institutions as a whole.

Over the years, we have collectively worked hard to build a Judiciary with an enviable reputation as a country. Our Judiciary has produced some of the best Jurists on the African continent and I dare say, in the world. Ghanaian Jurists have served in top positions in the judiciaries of other African countries and in many reputable international institutions. The role an effective, independent and impartial Judiciary plays in attracting investment, ensuring national stability and improvement in the general well-being of the citizenry cannot be over emphasised.

As the political tradition that birthed the fourth republic, we are deeply concerned that if this matter is not handled with utmost transparency and the required seriousness, it could compromise public confidence in the judiciary and roll back the many gains that we have made in our forward march as a viable democratic state.

In this regard, and without taking sides or commenting on the merit or otherwise of the said allegations of bribery against the Chief Justice, we believe that an investigation by the Police CID would be woefully inadequate to assure the Ghanaian public that a thorough inquiry has been conducted into the matter.

We are of the considered view that the recent history of the Police CID with respect to investigations into allegations against high-ranking officials of the Akufo-Addo/Bawumia government would not afford the sort of confidence that must be engendered in an investigation such as this considering the elevated position of the person against whom these allegations have been made.

We recall how corruption cases like the Australia Visa fraud scandal, the Galamsey fraud scandal, the 500 missing excavators scandal, just to mention a few ended in clear cover-ups when handled by the Police CID. The magnitude and gravity of this matter calls for utmost transparency and confidence building which the CID cannot muster at the moment.

We in the NDC hold the view, that though these allegations have a component of criminality, it is in equal measure about alleged misconduct on the part of a judge and as such it would ordinarily fall within the ambit of the Judicial Service to take steps to unravel the truth about this matter and take disciplinary action if proven to be true. This is exactly what was done in the bribery expose’ of ace investigative journalist Anas Aremeyaw Anas against some Judges few years ago.

Ladies and gentlemen of the media, the difficulty however with this is that the investigations would concern the Chief Justice who is the subject of the bribery allegations in this matter and in whom disciplinary authority against Judicial Officers is vested under Section 18 of the Judicial Service Act. Therefore, good governance dictates that the Chief Justice steps aside during the pendency of the investigations by the Judicial Service relative to the issue of alleged misconduct on his part as a Supreme Court Judge. The Chief Justice cannot be a judge in his own cause hence cannot setup a committee to investigate allegations of misconduct against himself.

Also, we think that due to the considerable public interest involved in this matter, another effective and transparent approach in the circumstance would be a full-blown public inquiry. This can be done by invoking Article 278 of the 1992 Constitution under which Parliament can by a resolution compel the President to set up a Commission of Inquiry to look into the matters at hand in a transparent manner and make a faithful determination thereof.

Friends, we are now confronted with a very dicey situation, where it is the word of lawyer Akwasi Afrifa on the one hand against the word of the Chief Justice and the Chief who is alleged to have paid the bribe in question on the other hand. As I have already explained, this issue has dire consequences for the reputation of not just the Judiciary but our revered Chieftaincy institution and the country as a whole. The question is, whose account among the three should we believe as a country? Who is telling us the truth? Is it the Chief Justice and Nana Ogyeedom or is it Lawyer Kwasi Afrifa? We believe that only credible and transparent investigations can establish the truth in this matter. And we hold the opinion that the transparent approach of a Public enquiry is the best way to go. This approach we believe is in the interest of the Chief Justice who stands accused and his accuser.

Conversely, CHRAJ, which has an enviable reputation of looking into similar cases of alleged corruption against highly placed state and government officials would be better placed to conduct such a serious inquiry.

We also disagree with the referral of these allegations to the General Legal Council’s Disciplinary Committee by the Chief Justice, for the sole reason that it is an offshoot of a body Chaired by the person at the center of these allegations-the Chief Justice. The likelihood for an impartial and balanced investigation by them into this matter would be quite minimal so long as the Chief Justice remains at post. We therefore believe that the GLC should stay its hands over this matter pending the final determination of the issue by independent state organizations cloaked with requisite authority to do so.

Best practice would require that the Chief Justice steps aside temporarily until the matters are looked into and a clear outcome emerges and we believe this instance calls for such an action.

Friends from the media, in making these calls, we are guided by the supreme interest of governance and the preservation of the image of critical state institutions like the Judiciary and its leaders especially the Chief Justice. No iota of doubt must remain about its integrity and credibility and it is absolutely imperative that everything is done to guarantee this.

Thank you for coming