Tributes as Bishop Peter Owusu Ansah is laid to rest 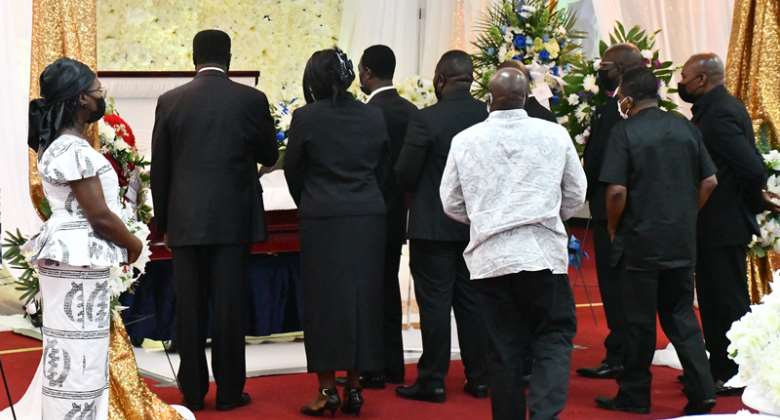 The Christian Journal, Bronx NY - Bishop Dr. Peter Owusu Ansah, Founder and Overseer of the Calvary Deliverance Christian assembly, who passed away on May 27, 2021, after a short illness, was laid to rest on Saturday June 19 at Mount Hope Cemetery in Westchester County in New York.

He was laid in state in an open casket in his church’s main sanctuary as hundreds of mourners, including a large number of the Clergy, filed past the body in a show of solidarity with his family. Members of The Ghanaian Ministers Fellowship took turns to mount celebratory guards beside the body in honor of their fallen colleague.

In his tribute, Arch-Bishop Alexander of the New Covenant Ministry in the Bronx and a longtime acquaintance of the late Bishop, said the late Dr. Owusu Ansah dedicated his life to the emancipation of those walking ‘in the dark’ and embodied a life of faith and virtue.

His church in a tribute said the late Bishop was a father, who was committed to the physical and spiritual well-being of his flock and the community, left a vacuum very difficult to fill. "The zeal and commitment of the Bishop to win souls for Christ and to move God’s Kingdom forward cannot be described by ordinary words. Daily outreach and distribution of gospel tracts in poor neighborhoods, sub-way stations, public parks, feeding programs for the poor and needy are but few examples of the spiritual and social causes he championed,” the church stated.

The church added that those who benefited from his outreach and mentorship programs, describe the late bishop as a selfless, down-to-earth leader, whose work on earth cannot be forgotten.

The Ghanaian Ministers Fellowship on their part, said Bishop Owusu Ansah’s tireless dedication to Jesus Christ and the Church inspired many. “As a former Vice President of the Ghanaian Fellowship International, he provided wise counsel and vision in times of crisis, brought people together through dialogue, and responded to the needs of the most vulnerable,” they said.

Through his Power Evangelism Network, the Bishop dedicated his entire life to the promotion of the kingdom business and his philosophy was sowing into the kingdom business, which he demonstrated by investing material and human resources towards the building of the kingdom, especially on soul winning. The late Bishop was always at the forefront of his team on his strategic one-on-one evangelism.

Bishop Dr Peter Owusu Ansah was born on June 18, 1948 at Mpasatia in the Ashanti Region. He got his basic education at the Kwadaso Ohwimase Anglican Primary and Middle Schools in Kumasi. He went on to Takoradi Polytechnic and later transferred to Kumasi Polytechnic of from where he gained admission to Kwame Nkrumah University of Science and Technology (KNUST).

He accepted the Lord Jesus Christ as his personal Savior at the age of 19 years and came under the mentorship of godly leaders in the Inter Varsity Christian Fellowship and the Scripture Union of Ghana. After his university education, he was hired as the Principal of Kumasi Technical College, where he established the Scripture Union for both Christians and Muslims.

Bishop Dr Peter Owusu Ansah was married to Prophetess Theresa Anna Owusu Ansah, of blessed memory. They were happily married for 41 years and were blessed with four beautiful daughters and four grandchildren.

He developed a great love for the Lord and was ordained as a Minister of God in the United States of America by the late Rev. DR. Isaiah Jones of Bronx Pentecostal Deliverance Center in 1986.

Bishop Ansah and his wife founded Calvary Deliverance Christian Assembly Inc., a non-denominational Church in the Bronx, New York, two years into his tenure at the Long Island Power Authority.

Faithful and committed service in the Lord’s vineyard resulted in his elevation to the Office of the Bishop in 2005 by the counsel of International Charismatic Bishops whose headquarters is in the Bronx, New York. Presently, Bishop Ansah serves as the Bishop of the Church and oversees his branches in New York and New Jersey.

Bishop Owusu Ansah founded a branch of the Power Evangelism Network (PEN) in Ghana in 1995, with the sole aim of promoting network unity among ministers of God and other members of the body of Christ for effective work of evangelism.

Currently, the organization has over 50 chapters located in all 16 regions of Ghana and Togo. The Lord has graciously used Bishop Ansah to bring several ministers together to engage in evangelistic crusades that have resulted in the salvation and healing of the afflicted in these regions.

From 2008 to 2014, Bishop Ansah served as Vice President of Ghanaian Ministers Fellowship International, a non-profit organization in the Bronx dedicated to encouraging and strengthening Pastors and Ministers of God in the Body of Christ.

Bishop Ansah authored five books: “Don’t Give Up Until You Get What You Want”; How To Step Out Without Fear Of Anything”, “How To Receive God’s Strength”; “The Simplest Way to Receive A Miracle” and “Have Faith in God”.

Latest Photo Reports
Catch up with all the political quotes from our politicians.
Advertise here
More from Tributes & Condolences
ModernGhana Links
Tribute To Nana Baafour Osei Akoto by the Government of Ghana at the Funeral on Thursday, November 14, 2002
Tribute to my fallen brother Peter Bulago
Mr R.K. Baffour Baffour goes home
TOP STORIES