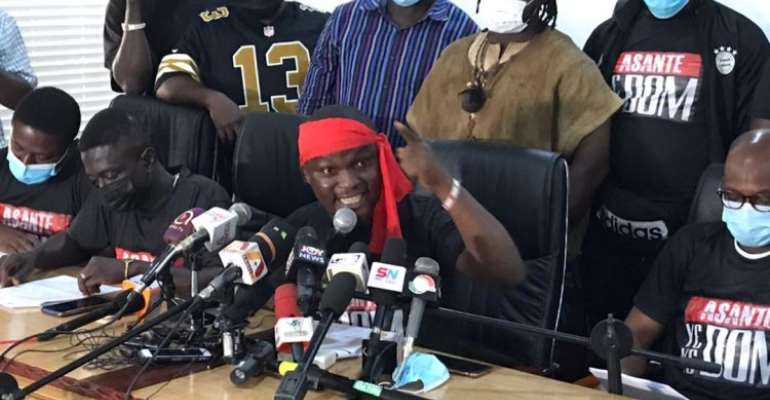 Reps from the five groups addressing the media in Kumasi

Some youth groups in Asanteman have collectively warned the General Overseer of Lighthouse Church International to ‘seek wise counsel’ and do the needful or risk closure of all branches of his church on Asanteman land.

Their warning follows a circulation of an audio of the renowned church leader allegedly making unprintable remarks about the King of Asante, Asantehene Otumfuor Osei Tutu II.

Mr. Kwabena Frimpong, General Secretary of KuYa who read the statement on behalf of the coalition noted that they initially decided not to respond to ‘these non-entities, coward and faceless questionable’ characters on social media especially, and other electronic media.

But, Mr. Frimpong said they were shocked to their bones when they intercepted an audio and video of a respected Bishop Dag Heward Mills making some uncomplimentary remarks against the King, and this, he pointed, made them break their long and painful silence.

“We know that there is a grand agenda to defame the King Solomon of our time, and such characters must be dealt with to the brim. They should know that where their boundary of liberty ends, there others’ liberty begins”. He said.

Among several questions they asked those purported to be maligning the King whether the people of Asanteman pay their taxes to the King or the Central Government, Manhyia presented any manifesto to Ghanaians and whether Bishop Heward Mills and his likes send their huge tithes and offerings to the King to develop Ghana.

All these notwithstanding, he noted, the King has over the years done a lot of projects which has employed or would employ thousands of people reducing the burden of unemployment on successive governments.

He mentioned that the Asantehene facilitated the building of Kejetia-Central market projects and currently Krofrom market, the Otumfuo Agro Industrial Park hosting Bodukwan Multi Fruits Processing factory which at its initial stage has employed hundreds of people, the Otumfuo mango plantation Teak plantation, oil plan plantation, Kenaf plantation which currently employs over thousands of people in the Bono Ahafo and Asante regions of Ghana.

In addition to these, he mentioned the Royal Jute Factory, which is expected to create over five thousand direct and indirect jobs in Ghana when completed, Prabon Estate, Green house project, the new Kumasi Project among others.

The Asante Youth groups who have been noted to fearlessly defend Asanteman and the occupants of the Golden Stool for decades stated emphatically that they would remain firm in their everlasting defense for the entirety of Asante, their enviable King and well flanked Chiefs, ‘this remains our earnest resolution and we pledge to defend them through the thick and thin’.

“We call on Dag Heward Mills to seek wise counsel within 48 hours, Otherwise none of his churches would be permitted to operate within the Asanteman enclave afterwards.

...also, we are warning all and sundry who hide under religion, tribe, politics, et al to push this evil agenda against Asante, Sikadwa and the King would be met with same brute force,” they warned.