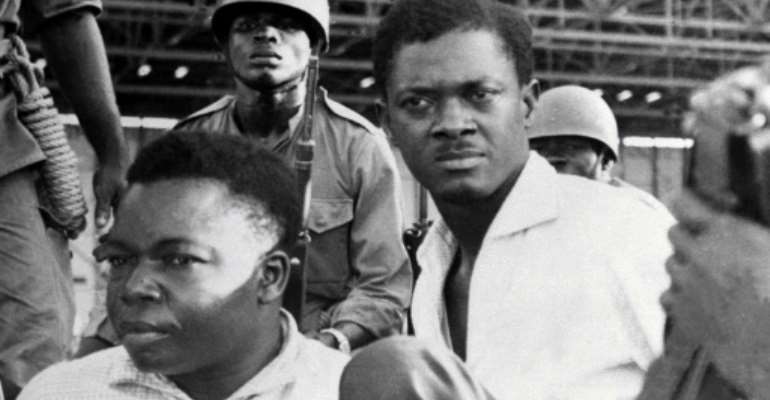 Soldiers guard Patrice Lumumba who was killed on January 17, 1961, by separatists and Belgian mercenaries. By STRINGER (AFP/File)

Sixty years after Congolese independence leader Patrice Lumumba was assassinated and dissolved in acid, former colonial power Belgium is to restore his last remains -- a single tooth -- to his family.

The handover ceremony will launch a period of official mourning, during which both countries will look back on their troubled past and the Democratic Republic of Congo will lay to rest a national hero.

In an interview with AFP in Brussels, Francois and Roland Lumumba, 69 and 63, explained how they had travelled to make arrangements and fix dates for the events in the Belgian capital to commemorate their father.

Belgium, which once controlled a vast tract of central Africa as Belgian Congo, will finally hand back the tooth that is thought to be the last human remains of Patrice Lumumba, who was murdered in 1961.

He is now known to have been killed on January 17 by separatists and Belgian mercenaries in the breakaway province of Katanga during the chaos that followed the territory's 1960 declaration of independence.

Lumumba was seen as a victim of Cold War rivalries. By - (AFP/File)

Perceived in Washington and Brussels as a potential friend of the Soviet Union, the young republic's first prime minister was seen as a victim of Cold War rivalries.

After he was shot his body was dissolved in acid, but Belgium has now recovered a tooth that was apparently kept as a souvenir by a Flemish police commissioner who took part in the disposal of the remains.

This "relic" will now be returned to the family and laid to rest after a series of "national funerals" in his homeland.

"For us, this is his remains, it means a lot to us," said Roland Lumumba, the third of the late premier's children after Francois and daughter Juliana, who last year wrote to Philippe, King of the Belgians, to ask for the tooth.

"As Africans we could not bring our grieving to an end without part of his remains among us. We have come to the end of a legal dispute that has lasted 60 years, and we are satisfied," he told AFP.

"It's a comfort, a new page has been turned," FranÃ§ois said.

Ceremonies are expected to take place on June 21 and 22 in Brussels.

The Democratic Republic of Congo will lay to rest Lumumba as a national hero. By - (AFP/File)

The brothers plan a first event to receive the remains from Belgian officials, then the next day an official Congolese ceremony, probably attended by the current President Felix Tshisekedi.

The family also hopes to be able to display a coffin draped in the Congolese flag in public in Brussels for the Congolese and broader African communities to pay their respects before the return.

Francois told AFP that the family and Belgian authorities had been able to "harmonise our views" on how things should go, but two Belgian official sources said there is still some uncertainty about the dates.

Another Belgian official confirmed, however, that a Congolese delegation is expected in Brussels to receive the tooth and that this should take place before June 30, when a ceremony in honour of Lumumba is planned in Kinshasa.

Tshisekedi has said he is planning a mausoleum in the DRC capital for Lumumba, who served as prime minister of the then Republic of the Congo between independence in June 1960 and September.

He was killed after Belgium backed the Katanga revolt in a Cold War manoeuvre and his young sons -- then ten and three years old -- were exiled for a while in Egypt, which under President Gamal Abdel Nasser was a non-aligned power.

The history of Belgium's involvement in Congo before and after independence has remained controversial, but a 2000-2001 parliamentary inquiry concluded that the country bore "moral responsibility" for Lumumba's assassination.

After Lumumba was shot his body was dissolved in acid, but Belgium has now recovered a tooth apparently kept as a souvenir by a Flemish policeman. By - (AFP/File)

In 2002, the Belgian government apologised to the country and for the past ten years there has been an active judicial investigation for an alleged "war crime" based on a complaint from elder son Francois.

According to the brothers' lawyer Christophe Marchand, the probe is coming to an end and the plan is to have a first hearing before before the end of the year before a judicial body that can refer the case for a possible trial.

"Little by little, Belgium is facing up to its very painful and criminal colonial past and is taking action," the lawyer said.