Summit of Business within Portuguese-Speaking Countries 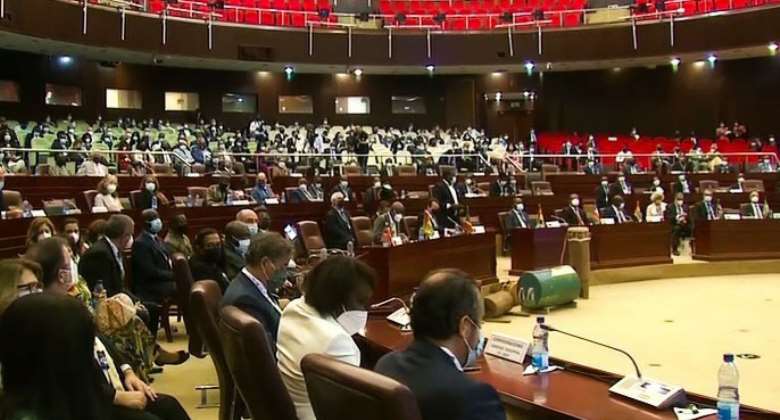 Long before the Portuguese-speaking countries wrapped up their first business summit in Simpopo, Equatorial Guinea that gathered approximately 250 government officials and corporate business leaders from Guinea Bissau, Cabo Verde and Sao Tome and Principe, Portugal, Brazil and Mozambique, it was described as a step directed at bringing sustained business development.

Some argued that the gathering historically provided the chance for immense business networking opportunities and building strategies. It additionally offers an important impetus for strengthening future corporate business collaboration among the countries.

According to the organisers, the primary goal was to explore ways to attract investments to the countries in bloc, as well as strengthening economic ties between member states and improving the business environment.

“The Republic of Mozambique is the scene of aggressions perpetrated, planned and financed from outside its borders, claiming human lives, displacing populations, destroying personal and public property, and sowing terror in the north of the country,” he said.

Obiang believes that the CPLP “should not remain oblivious to this tragedy, which goes beyond the dimensions of a simple internal conflict. It is an aggression”.

He characterised it as an opportunity to identify the challenges the bloc faces and seek ways to facilitate trade between CPLP countries as well as attracting more investment. “Our wish is that the business community takes this opportunity to form a common front when it comes to facing the challenges that affect its activity. It should also make the most of its respective advantages to participate actively in promoting economic cooperation among the CPLP countries, always having as priority the member countries of our community,” the Equatorial Guinea president said.

President of Cape Verde, Jorge Carlos Fonseca, who participated in the summit virtually, advocated for the creation of customs facilities for CPLP countries within the bloc. “There is an urgent need to create joint solutions for the reciprocal protection of investments, reducing, or even eliminating, where possible, double taxation, and facilitating the circulation of public documents within our community without excessive authentication and notarisation burdens,” he urged.

President of Sao Tome and Principe, Evaristo Carvalho, spoke of the need for investments in the CPLP countries to be sustainable, especially in Equatorial Guinea, which was experiencing a boom in mineral resources. “Our appeal is to look at the country with confidence, stripped of a culture of short-termism. With thought for the country’s development, let’s seek sustainable solutions and invest in the medium and long term, he advised.

While various issues were discussed during the two days, there was particular interest in mineral exploitation, oil and gas development within the bloc. The panel session spent time analyzing widely the various dimensions and aspects of the sector.

Equatorial Guinea’s Minister of Mines and Hydrocarbons has called for a common project of the Portuguese-language countries for gas exploration, stressing the need for a longer energy transition in some African countries. “Hydrocarbon producing countries such as Equatorial Guinea, Angola, Mozambique or Brazil and Portugal, as a major consumer, it is very important that we can work on a coordinated project at the CPLP level to be able to exploit the gas for use in our economies,” Gabriel Obiang Lima said.

“It will be increasingly difficult to get funding to develop our [oil] products because worldwide there is a great motivation to carry out the energy transition from hydrocarbons to renewable energy,” he noted.

Despite this, he said, in countries such as Equatorial Guinea and others in Africa, this transition will have to take at least another 20 years. “Only then will we be at the level of developed countries,” he said.

The Equatorial Guinean Minister was speaking at a panel with government officials from Guinea Bissau, Cabo Verde and Sao Tome and Principe, as well as representatives from Portugal, Brazil and Mozambique on the role of governments in attracting foreign investment.

Speaking at the panel session, Luís Moreira Testa from the Portugal’s Socialist Party in Parliament, explained that in the new advent of renewable energy, Portugal has the potential to move from energy consumer to producer. “Hydrocarbons will serve in the coming decades as transition fuels. Portugal is a major consumer of natural gas, mainly from Algeria, and the new generation of natural gas consumption in Europe foresees the mandatory inclusion of green hydrogen,” he said.

According Luis Testa, the pipelines that bring gas from Algeria may soon take the gas produced in Equatorial Guinea or Mozambique cut with green hydrogen produced in Portugal. “This could be a great opportunity for energy communion in the CPLP,” he said.

Cabo Verde’s Minister of Trade, Industry and Energy, Alexandre Dias Monteiro, considered mobility within the Portuguese-speaking community as a critical factor for creating a favourable framework for business and foreign investment. “Mobility is a critical factor for contacts and exchanges between companies and businesspeople,” he said, stressing the progress made in this area in recent years, which should make it possible to sign a mobility agreement at the next summit of heads of state and government, in July in Luanda.

Guinea-Bissau’s Economy Minister, Victor Mandinga, advocated the creation of an investment promotion agency at the community level to link up with agencies in each of the countries. “This mechanism is essential to make legislation on investment more homogenous and the distribution of investment opportunities between countries more harmonised,” he said, adding that businesspeople lacked transversal information about the CPLP as a whole.

Sao Tome’s Foreign Minister, Edite Ten Jua, noted the importance of creating a climate of trust for attracting investment, particularly in terms of legal protection and tax justice, as well as simplifying administrative procedures, along with the existence of infrastructure and means of transport and communications.

President of the Community of Portuguese Speaking Countries Business Confederation Salimo Abdula, speaking during the opening, urged the governments of member countries to speed up the process of creating the CPLP Community Development Bank to facilitate financing for bloc projects.

“The bank will be a tool which will support projects of small, medium or large size, thus overcoming the difficulty of access to financing, which often has a high cost in CPLP countries, making projects unfeasible,” Abdula argued.

Abdula further proposed the creation of a CPLP arbitration court, because, despite being united by the same language and economic interests, conflicts between stakeholders from different member states could arise.

“This court would make it easier to settle disputes between businesspeople in the community. At this moment, this project (the CPLP Arbitration Court) is at a very advanced stage. A team was formed that is working hard on the subject and has already produced several document proposals and prepared a questionnaire aimed at defining an ideal model for the construction of such an arbitration court,” Abdula told the gathering.

The opening of the summit coincided with World Portuguese Language Day. According to Rádio Moçambique, monitored by Eurasia Review, there is an estimated 300 million speakers spread across four continents. The first CPLP Business Confederation business summit held under the motto, “Together We Are Stronger and Move the World Forward” in Simpopo, Equatorial Guinea.