Guinea to put 60 people on trial for unrest 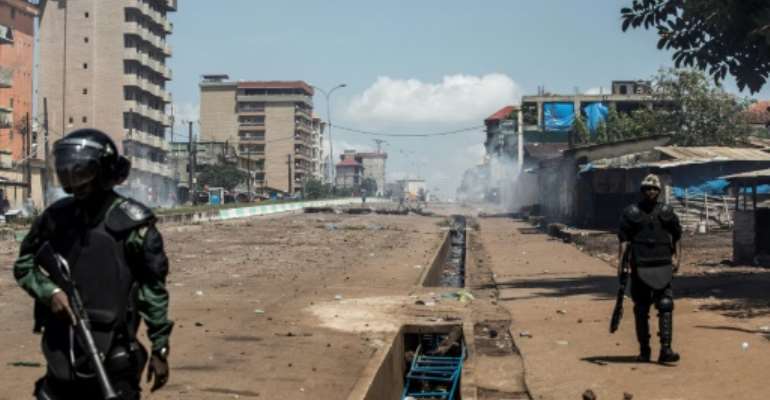 Dozens died in protests against a third term in office for President Alpha Conde. By JOHN WESSELS (AFP/File)

Some 60 people, including opposition figures detained for months, will stand trial in Guinea over deadly protests surrounding last year's presidential election, according to the government.

Alpha Conde's bid for a third term in office was met with months of demonstrations by political opposition and civil society groups, which security forces countered with sometimes brutal force, and dozens of people died after the protests began in October 2019.

In March 2020, at the same time as legislative elections, Guinea held a referendum to change the constitution and allow the president to serve more than two terms.

Despite mass opposition and claims of an "electoral coup d'Etat", Conde, 83, was re-elected in the first round in October 2020.

The United States, the European Union and France questioned the credibility of the vote.

Hundreds of people were arrested both before and after the ballot, human rights groups said.

Government spokesman Tibou Kamara said Friday night in a statement that 57 of those arrested would face court.

The list includes eight people charged with killing three gendarmes and a soldier in an attack on a mineral ore goods train near Conakry just days after the presidential vote.

Both men were arrested after the ballot and charged, according to their lawyers, with making, possessing and using weapons and undermining the nation.

The spokesman added that 40 people had been set free after proceedings against them were dismissed.

'Get rich quick' attitude among the youth eroding moral fabr...
9 minutes ago