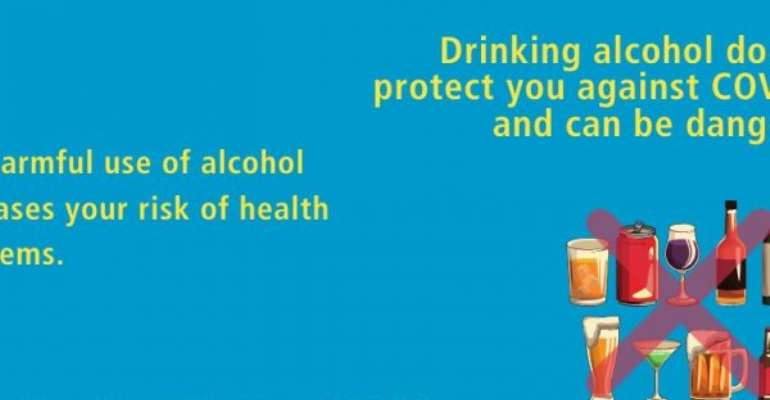 Contrary to World Health Organisation (WHO) confirmation that inoculation against COVID-19 was effective and could reduce the incidence of the virus, some residents of Ashaiman in Tema think otherwise.

Speaking to the Ghana News Agency on the vaccinations, some of them indicated that drinking alcohol was good enough to protect themselves against the virus and therefore there was no need for vaccination.

The WHO however dispelled that notion adding that alcohol intake was dangerous and was unable to protect them against COVID-19.

“Consuming alcohol will not destroy the virus, and its consumption is likely to increase the health risks, if a person becomes infected with the virus, therefore the assertion by some residents at Ashiaman must be discarded.”

Speaking to the GNA at Ashaiman near Tema, Mr Summel Appiah said, alcohol serves as medicinal purpose “it is a mixture of herbs, Neem tree, Cinnamon, Ginseng and Ginger and serve as immune booster better than any vaccination”.

He also described alcoholic beverages as emotional stimulus drink, but noted that occasionally getting involved in problems, or insulting others are some byproducts of the drink which should not be used to judge the beverage.

Mr Cosmos Kofie, who is also a resident said, “Akple and Ademe”, Okro stew and “Akpeteshi” was his main stimuli, “even though sometime I don't have money to purchase it”.

However, Mr Solomon Duku a medical student at Jiangsu University Medical School refuted the claims stressing, “Alcohol does a lot of harm to the human body,” people have the wrong perspective, that alcohol can kill bacteria in the body.

He added that, there is an amount of alcohol in the body because of the fermented food “we eat, the Yogurt, Kenkey, Banku and Sugarcane which naturally produced alcohol in the body. The body through natural means get enough alcohol to function, any other extra harms the body”,

Mr. Duku said, alcohol can destroy the cells of the lever and can cause still births, miscarriages, and the kidney.

In addition, they will have health implications when they are 30 years and later in their lives, “people should rather divert their attention to taking good diet, exercising, taken water and sleeping” which will make them healthy.

Meanwhile WHO information indicated that alcohol had effects, both short-term and long-term, on almost every single organ of the body. Overall, the evidence suggested that there was no “safe limit” – in fact, the risk of damage to your health increases with each drink of alcohol consumed.

According to the WHO information available to the GNA, alcohol use, especially heavy use, weakens the immune system and thus reduces the ability to cope with infectious diseases.

“Alcohol, even in very small quantities, is known to cause certain types of cancer. Alcohol alters your thoughts, judgement, decision-making and behavior”.

Heavy use of alcohol increases the risk of acute respiratory distress syndrome (ARDS), one of the most severe complications of COVID-19.