For Gabon's football players, the name of the game is survival 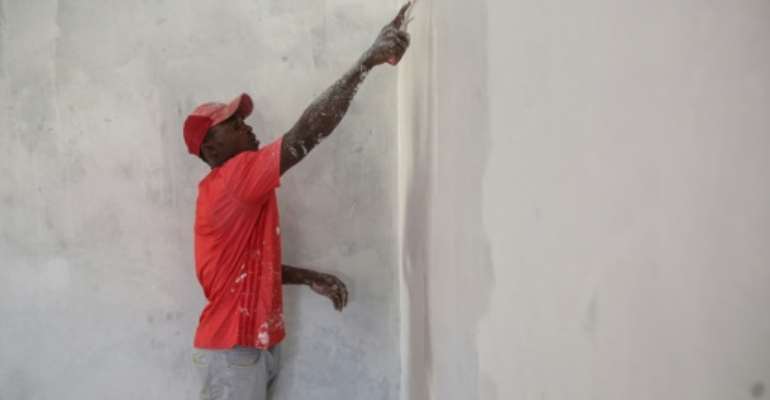 Dressed in a red Real Madrid jersey smeared with white, Gamamba Souleimane applies a fresh coat of paint to the walls of a small house in Gabon's capital Libreville.

At 28, when he should have been at the peak of his sporting career, this professional football player has traded the ball for a paint roller and his cleats for work boots.

He has given up on playing football, his lifelong passion, simply to make ends meet.

"Of course it's hard -- I would've liked to keep going but I realised that football can't take me anywhere in Gabon," he says.

Football is a growing source of pride in the small but oil-rich central African country.

The national team, led by Arsenal star Pierre-Emerick Aubameyang, is ranked 18th in Africa and has just qualified for the Africa Cup of Nations tournament in Cameroon next year.

"Since I started in construction I earn eight times more than what I got on the football field," says former pro player Gamamba Souleimane. By Steeve JORDAN (AFP)

But unpaid salaries, violated contracts and suspended championships mean players for local clubs struggle to make ends meet. Some professionals even depend on a food bank to survive.

"Covid finished us off," says Gamamba grimly, paint flecking his face as he sweeps the roller up and down.

"Since I started work in the building trade I've been earning eight times more than on the pitch," he sighs.

"I'm lucky to have another job besides football, but when I think of my teammates... they're treated like dirt."

"These are guys for whom people lack respect, who don't have enough money to eat or buy clothes, who have to grovel for 1,500 CFA francs to get a taxi home," says Gamamba angrily.

The pandemic brought pro football in Gabon to a halt and players stopped receiving any income. By Steeve JORDAN (AFP)

The problems have a long history.

For years, lack of funds has inflicted long disruptions on Gabon's professional championship.

In the 2018-2019 season, in a last-ditch effort, games were organised in a pool format with play-offs over two to three months.

But with the arrival of coronavirus in March 2020, all professional sports competitions ground to a halt and players stopped receiving any income.

The ANFPG has asked the government and the country's football federation to start games up again -- or at least to provide aid to the country's 700 or so professional players.

Chicco Sassou, 32, does physical training during the week and plays amateur games on weekends. By Steeve JORDAN (AFP)

But Mounguengui insists the conditions for resumption will have to be an improvement on the past.

Clubs failed to respect players' contracts, he says, for a variety of reasons -- "lack of sponsorship because it's a small market, lack of an interesting competition and no support from fans."

"Then there's the delay in paying state subsidies -- which, unfortunately, make up the majority of clubs' budgets."

ANFPG is now shifting its focus to helping players retrain in new careers.

"But most players have no (professional) training -- they quit studying after primary school," says Ebanega.

With the help of FIFPRO -- the international federation of professional footballers' associations -- the ANFPG has created a food bank.

Eight players each month can get a kit containing about 30,000 CFA francs worth of rice, canned goods, oil and other products.

Chicco Sassou, 32, shows up to get one on Wednesday.

"It's going to help me get by for the next three weeks," he says softly.

In spite of the uncertainty, Sassou believes in his dream.

During the week he does physical training and on weekends he plays amateur games with neighbourhood teams.

"It's not the same level but you have to keep in shape," he says.

Sometimes he comes away with a small donation from his "big brothers" -- 20,000 to 30,000 CFA francs -- a welcome boost to help feed his girlfriend and child.

"I am trying to reach out to other former players to find out if there are opportunities, gigs I can do to make a little money," he says.

"The only way to make a living from football would be to leave here."

Tolon: NDC slams Bawumia for allowing hospital to rot after ...
33 minutes ago

Ban on noisemaking during Homowo festival to completely end ...
43 minutes ago