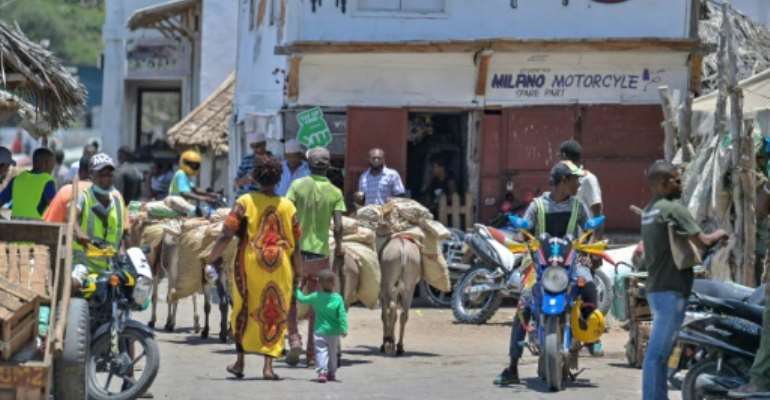 Old town of Lamu has seen an explosion in the number of noisy motorbike taxis known as "boda bodas". By Tony KARUMBA (AFP)

In the old town of Lamu, a historic Swahili trading outpost, a motorbike taxi weaves through a crush of donkeys, market hawkers and wooden handcarts.

A decade ago, there were only two vehicles on the sleepy island: a motorcycle for the electricity company, and the district commissioner's 4x4.

However in the past two years there has been an explosion in the number of noisy motorbike taxis known as "boda bodas", with the two-wheelers clogging ancient narrow lanes and threatening Lamu's coveted World Heritage status.

"(Their) numbers are surging. Now we have almost 400 boda bodas," said Abdulhakim Aboud, the deputy governor of Lamu County.

The bikes in February were banned from the waterfront and 16-hectares ringing the UNESCO-listed old town.

Anyone trying his luck is quickly flagged down by a government official and forced to continue on foot toward the bustling heart of this ancient settlement on the Kenyan coast.

Traditionally, goods and people in Lamu were transported by wooden dhows, or donkeys used to plod the cobbled pathways ferrying chunks of washed coral and mangrove timber to build Lamu's iconic Swahili homes.

Motorcycle taxis threatening the historic Kenyan town of Lamu have been banned from the waterfront and the area ringing the UNESCO-listed site. By Tony KARUMBA (AFP)

"All this town has been built by donkeys," said Walid Ahmed, from the "Save Lamu" community association striving to preserve the cultural heritage of the idyllic island.

The clamour of motorcycle engines has irritated some islanders who believe it jars with tradition, but also stirred fears of Lamu losing the unique character that lures tourists and global recognition to this remote corner of Kenya.

"It is a very bad idea. We don't have the pathways. Boda bodas are a modern issue which has come to distract the value of the heritage in Lamu," said Ahmed.

The town, with its signature stone houses and wooden curved doors, was named a UNESCO world heritage site in 2001 in recognition of its status as "the oldest and best preserved Swahili settlement in East Africa".

An important centre of Islamic culture, where Bantus, Arabs, Persians, Indians and Europeans overlapped for centuries, Lamu has been continuously inhabited for more than 700 years.

However those trying to make a living with the motorbikes are not happy about being seen as a menace.

Motorbike taxi drivers in the historic town of Lamu are not happy about being seen as a menace. By Tony KARUMBA (AFP)

"They are all complaining about UNESCO and the heritage site, yet we as the youth do not see the benefits," said Arafat Feiswal, secretary of the Lamu boda boda cooperative.

"As for me, the moment I leave my house my aim is to make money and thus I am not sure if there's a heritage site that is going to help put a meal on the table."

Tourism is a major earner for Lamu but a fragile one. Terrorist attacks by Al-Shabaab militants, though rare, blighted for a time Lamu's reputation as a peaceful island getaway.

Fishing, which has sustained the archipelago for generations, has also suffered since construction began on a massive port to Lamu's north that will serve as a major trading gateway to East Africa.

The impact of dredging on the industry has compounded the effects of overfishing in Lamu's idyllic waters, leaving fewer options for the island's youth.

Tourism is a major earner for the historic town of Lamu but a fragile one. By Tony KARUMBA (AFP)

More recently, the coronavirus pandemic has brought that hardship into stark relief.

Kenya imposed strict measures to contain the spread of the virus, including the brief closure of its border to international travel, hitting bottom lines in Lamu where reliable jobs are scarce.

"If the county is able to create permanent jobs for the youth, they should do so, we will then stop the boda boda business. If they can't, then they should let us find our own means of surviving," said Abdallah Mohamed, the secretary of the boda boda cooperative.

Authorities are aware of the problem and trying to work with young people to find alternative livelihoods, said Aboud, the deputy governor.

"Somebody who is hungry, who is looking for something to eat, will not buy your idea of saying 'let's preserve this for a tourist'," he said.

But for UNESCO, the threat to Lamu goes beyond the boda boda problem.

For UNESCO, the threat to Lamu goes beyond the boda boda problem. By Tony KARUMBA (AFP)

"The perils, there are many," said Karalyn Monteil, programme specialist for culture at UNESCO headquarters in Nairobi.

She said boda bodas pose a visible challenge but Lamu's cultural heritage was under siege from multiple threats, including urban encroachment, development pressure such as that from the new port, and waste management.

"All these are ongoing challenges that UNESCO has been looking at with the site for a while... It is urgent that Kenya takes action," Monteil said.

If nothing is done, the World Heritage Committee could add Lamu to its list of heritage sites in danger at its next meeting in July.