Bagbin to be fined for breaking COVID-19 restrictions? 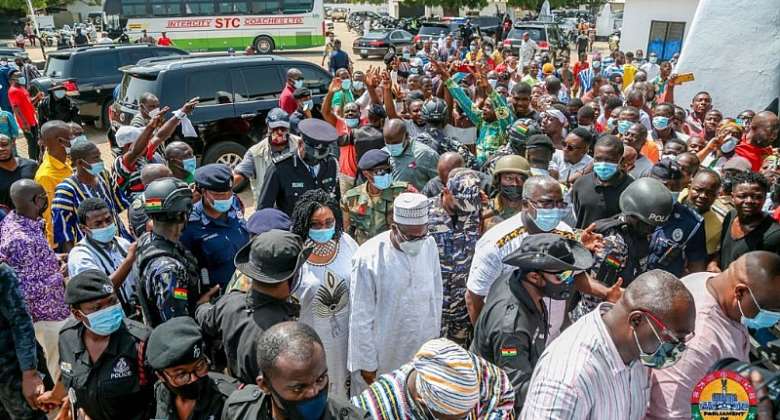 The No. 3 gentleman of the land have ignored the COVID-19 restriction on big gatherings to organize a mammoth gratitude durbar in his home region and Ghanaians are waiting to see if he would be fined or panelized. The almost stampeded crowd who came to welcome him on his arrival back to his home region to the Upper West Region, on April 7, violated all the COVID-19 protocols. Fellow Ghanaians, would the Speaker of the 8th Parliament, Rt. Hon. Alban Sumana Bagbin be fined or penalized? Your guess is as good as mine.

Bagbin’s gratitude durbar is one of the biggest events ever held in the country since the COVID-19 outbreak and the subsequent imposition of restrictions on public gatherings. The event was hugely publicized, the media covered it extensively, military chopper airlifted the speaker and some dignitaries from parliament in Accra to the upper west region. The number of participants at the event was many folds more than the ceiling set on all events in the country. COVID-19 protocols were violated, but the event received the blessings and support of the security agencies and many other state agencies. The media added some flavor to how glamorous the event was. This singular event dismantled all the efforts designed so far to uphold the general public’s trust in the rules on social restrictions. George Orwell’s animal farm couldn’t have been explained better without this. If the speaker is not penalized, this confirms the saying that some are more equal than others. Somewhere in Norway, the prime minister was fined for celebrating her birthday with 13 family members exceeding the maximum number of 10 for social gathering.

According to The Guardian, the Norwegian PM, Erna Solberg was fined 20,000 kroner (£1,713) for organizing a birthday party when Covid restrictions were still in place. She broke the COVID-19 social-distancing rules she has been so keen in enforcing as an organizer of a small family event to celebrate her birthday. The PM and some 13 family members held a 60th birthday anniversary at a mountain resort around February ending violating the ceiling of 10 people at social gatherings. The investigation into the matter by the police was started after the public broadcaster NRK broke the story. The PM has since apologized to the Norwegian people on Norway’s TV2 News and promised to pay the fine.

In justifying the fine, the police chief had this to say in a news conference,

“Though the law is the same for all, all are not equal in front of the law,” the police chief, Ole Saeverud, told a news conference, justifying the fine. “It is therefore correct to issue a fine in order to uphold the general public’s trust in the rules on social restrictions.”

The Norwegian police added that the fine might not have been necessary, but the PM herself have been the champion of the government’s work to impose restrictions. Her husband and co-organizer of the event, Sindre Finnes also broke the law, but he was not fined. The restaurant that hosted the event also violated the law but was also not fined. The PM was panelized for her role in imposing those restrictions and breaking them herself. This communicates volumes to the ordinary Norwegians.

The president, No. 1 gentleman has communicated in all his addresses to the nation some punishment for people who break the COVID-19 protocols. This No. 3 gentleman was a member of the parliament that passed the executive instrument authorizing the president to impose those restrictions. Unlike the Norwegian PM, who held a much private event among family members and exceeded the permitted number only by three, Ghana’s No. 3 gentleman publicized the event and held a public event with a huge turn-out, but would he be punished? The ordinary people have been made to clean the drains. Pastors were fined and some jailed for failure to pay the fines in the past. Many others continue to be punished for breaking the rules, but like the Norwegian PM, would the lawmaker be panelized for his role in imposing those restrictions and breaking same rules? I guess Ghanaians will seek answers till thy kingdom come, because the lawmakers make the laws for the poor and weak in the society and break them with impunity. Indeed, the politicians preach virtues and practice vices.

Ghana like many other nations across the globe have used suppression strategies as public health response policies including population-wide shelter-in-place mandates or lockdowns, closure of nonessential physical venues, travel bans, testing and contact tracing, and quarantines without coercion of any internal and external forces. Ghana made the choice to fight the community infection this way. It is therefore quite hypocritical to set rules and allow the elites to break them openly. Why not go the Swedish way and stop this hypocrisy?

Unlike many other countries, Sweden chose mitigation over suppression strategies and mitigated specific acquisition risk among the ageing population, for example. Sweden’s strategy produces less negative impact on education, public mobility, accessibility to general health care services among others. Sweden chose not to be hypocritical like Ghana, where the elite can have their way whilst the ordinary citizens suffer all the negative impact of the suppression strategies. Though the Swedish strategy have proven to be a bad choice as compared to its neighbors like Norway, Denmark and Finland, Ghana can go that way if it is difficult to contain the elite. Bagbin can hold such a big event, but parties and funerals-very important cultural rites and traditions are sacrificed.

Funerals are being postponed or are held with a limited number under the COVID-19 restrictions. Corpses have remained in the mortuary for long time with people not knowing when to observe the final rites for their loved ones. Some buried their loved ones hurriedly with very few family members and postponed the funeral rites indefinitely. Marriages cannot be celebrated like before and newborn babies cannot be outdoored at the admiration of family and friends anymore, even in small towns and villages, where they could never draw massive crowd like Bagbin’s thanksgiving ceremony. Churches and mosques must keep a small congregation at any point in time. Even our most cherished Independence Day was cancelled, and the presidential inauguration was an indoor event, first time since independence.

To prove that the law is the same for all, the Speaker of the 8th Parliament, Rt. Hon. Alban Sumana Bagbin must be fined or penalized. The belief of Ghanaians that all are not equal before of the law is rather consolidated and justified without a fine for the No. 3 gentleman. At least, for public health promotion purposes, it is relevant to issue a fine in order to uphold the general public’s trust in the rules on social restrictions.