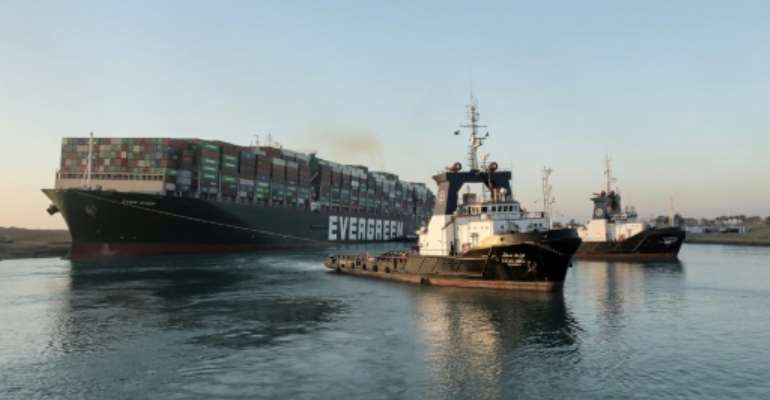 Tugboats pull the Panama-flagged MV Ever Given to unobtrusive sanctuary after its stern and bow were successfully prised from the banks of the Suez Canal. By - (SUEZ CANAL AUTHORITY/AFP)

The near week-long shutdown of the Suez Canal threw an uncomfortable international spotlight on Egypt, but experts see limited overall fallout for its commercial shipping reputation.

The accident, in which a 200,000-tonne container vessel became wedged diagonally across the canal during a sandstorm, blocked a crucial shipping artery used for 10 percent or more of world trade.

But fears that it could take weeks to refloat the behemoth proved unfounded.

Six days into the crisis, after major operations involving a flotilla of tug boats and excavators dredging up sand, the Japanese-owned MV Ever Given was freed and taken to an unobtrusive anchorage.

"Anywhere else in the world, this operation would have taken three months," boasted canal chief Osama Rabie, adding that "99 percent" of personnel working at the scene had been Egyptian. 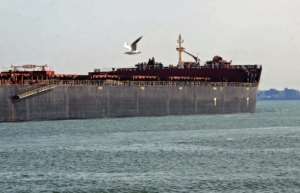 A ship on its way near Egypt's Suez Canal on March 30, 2021, a day after passage of the waterway was made possible once more by the dislodging of a giant container ship. By Tarek WAJEH (AFP)

Visibly relieved, he said he had been told by President Abdel Fattah Al-Sisi that "the reputation of Egypt rested on my shoulders".

Sisi, who deposed Islamist president Mohamed Morsi in 2013, spent over $8 billion to widen and add a 35 kilometre (21 mile) second lane on a northern segment of the canal amid much pomp six years ago.

The country has emerged from the short crisis with credit, said Tony Munoz, editor-in-chief at trade publication Maritime Executive.

However, Munoz also pointed to the significant role played by the international salvage specialists who worked alongside Egyptian personnel.

Munoz cited in particular the crisis management expertise provided by Resolve Marine's Captain Nick Sloane, who was also salvage master for the clear-up of the 2012 Costa Concordia cruise ship disaster off Italy. 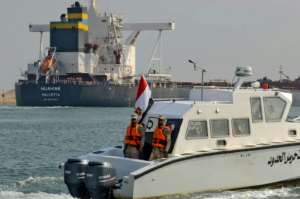 Egyptian coast guards patrol as a ship navigates the newly reopened Suez Canal after a near week-long blockage. By Tarek WAJEH (AFP)

"There was bound to be some domestic flag-waving about the success of the refloating... but it does not diminish the Dutch involvement," said Angus Blair of the American University in Cairo, referring to Dutch firm Smit Salvage.

Both Blair and Munoz saw little or no impact from the canal blockage on Egypt's share of shipping cargo traffic over the medium-term.

"In essence, this was only a traffic accident -- (albeit) a big one," said Blair.

"Airports have accidents, but within hours to a day the airport will reopen and then there is an investigation to determine the cause," he added. "So, I do not think there is damage to Egypt's reputation".

Munoz noted that "the alternative of sailing around Africa is not reasonable", emphasising that the whole "purpose of these mega-boxships is to reduce port calls and operational costs".

But Yezid Sayigh, a senior fellow at the Carnegie Middle East Center, noted that "when oil prices drop below a certain level, the longer route around the Cape of Good Hope becomes cheaper", referring to the route around southern Africa. 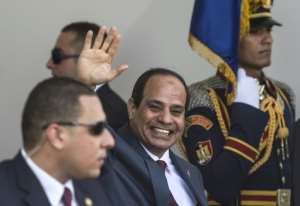 Egypt's President Abdelfattah al-Sisi at a ceremony for the opening of a second lane and widening of the Suez Canal in August 2015, a project that cost over $8 billion. By KHALED DESOUKI (AFP)

An expert on the enormous economic sway of Egypt's military, Sayigh has long seen the costly 2014-15 expansion of the canal as ill-judged.

In a 2019 study, he noted that "Sisi's demand that it be completed within one year rather than the three years it was estimated to require" contributed to the cost of the project more than doubling from initial estimates.

The 2014-15 expansion was driven by overly optimistic shipping traffic projections, amid competition for some Asia-Europe cargo traffic from the Panama canal and Arctic shipping route, he told AFP.

But the expansion project had anticipated annual transit fees would hit $13.5 billion by 2023.

Faced with this disappointing balance sheet, even Sisi was quick this week to rule out a costly widening of the southern section of the canal where the Ever Given got stuck.

While the immediate shipping traffic jams should clear before the end of the week, apportioning responsibility for losses suffered by the numerous parties is likely to play out through litigation, according to credit ratings agency DBRS Morningstar.

That could ensure uncomfortable scrutiny of Egypt extends well beyond the canal blockage. 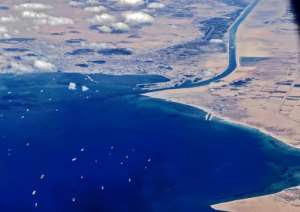 The blockage of the canal caused tailbacks stretching to hundreds of cargo ships at the northern and southern entrances. By Mahmoud KHALED (AFP)

"Egypt has resisted transparency" over a number of incidents, including "the murder of Italian PhD student Giulio Regeni in 2016," noted Sayigh.

Regeni was researching Egyptian trade unions when he was abducted in January 2016; his mutilated body was found on Cairo's outskirts, and Italian prosecutors want to put four Egyptian security officers on trial for the killing.

When it comes to the Suez probe, Egyptian authorities "would be well advised to be very transparent in this instance so as to avoid further reputational damage," Sayigh told AFP.