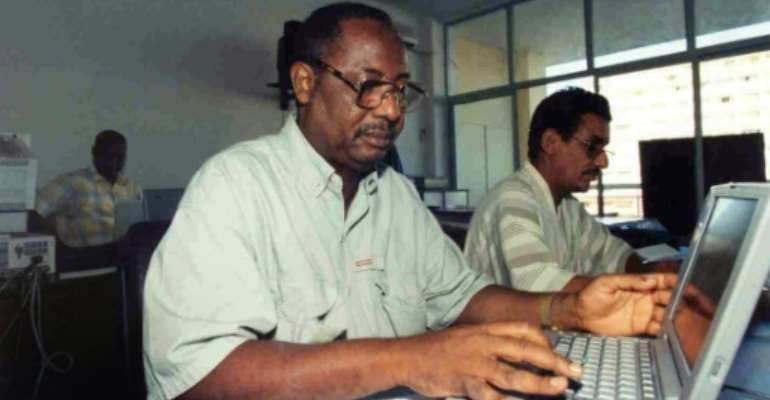 AFP's former correspondent in The Gambia, Deyda Hydara, left, pictured in the agency's Dakar bureau in 1999. By Seyllou (AFP/File)

A Gambian man has been remanded in custody in Germany on suspicion he was part of an army hit squad under the orders of ex-Gambian president Yahya Jammeh, prosecutors said Wednesday, with an AFP correspondent among the victims.

The suspect, named by prosecutors as Bai L., is accused of crimes against humanity, murder and attempted murder while working as a driver for an army unit that hunted down Yahya's opponents between December 2003 and December 2006.

He is accused of involvement in two murders and one attempted murder, including the 2004 killing of Deyda Hydara, editor and co-founder of the independent The Point daily and a correspondent for AFP for 30 years.

Hydara was killed by unidentified gunmen in his car on the outskirts of the Gambian capital Banjul in December 2004.

Bai L. is accused of having helped the unit to stop the journalist's car on a road in the town of Kanifing, where two members shot him several times.

The suspect is also believed to have driven one of the killers in his own vehicle.

Bai L., who was identified by German media as Bai Lowe, was arrested in his flat in the northern city of Hanover in the early hours of Tuesday.

Prosecutors said he was also allegedly the driver of a team that carried out the attempted murder of a lawyer in 2003, and the killing of another suspected opponent of the president in 2006.

"This unit was used by the then president of The Gambia to carry out illegal killing orders, among other things" with the aim of "intimidating the Gambian population and suppressing the opposition", prosecutors in the city of Karlsruhe said.

Hydara's murder was widely condemned locally and abroad as another sign of Jammeh's despotic rule and his stifling of all opposition in the former British colony.

Jammeh ruled The Gambia with an iron fist for 22 years.

He fled in January 2017 after losing a presidential election to relative unknown Adama Barrow. He refused to acknowledge the results but was forced out by a popular uprising.

Bai L. had fled to Germany in 2013, according to TAZ daily, and had given press interviews in which he detailed the murders carried out by the army hit squad.

His case is being brought in Germany on the principle of universal jurisdiction, which allows a foreign country to prosecute crimes against humanity, including war crimes and genocide, regardless of where they were committed.