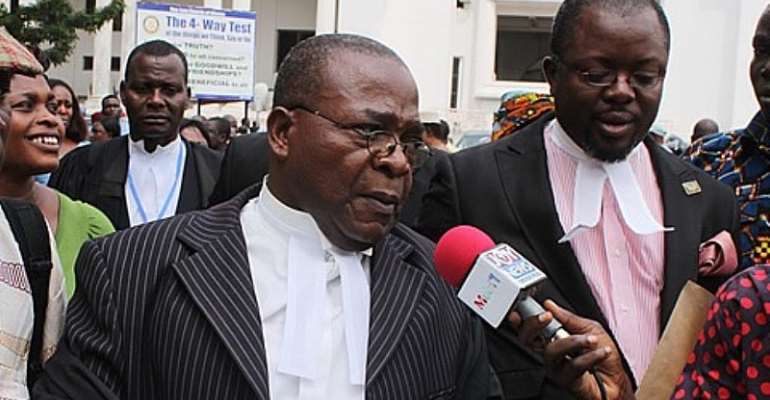 A former Chief of Staff under the Rawlings administration, Mr Nana Ato Dadzie has said that the Chair of the 1st Respondent in the just-ended election petition hearing at the Supreme Court, the Electoral Commission (EC), should have mounted the witness box to answer questions.

During the petition hearing, lawyers for the 1st and 2nd respondents decided not to elect witnesses to testify in the case.

The seven-member panel ruled that indeed that the EC’s Chair, Jean Mensa could not be compelled to testify in the election petition hearing.

Counsel for the petitioner Tsatsu Tsikata applied for a review of that particular ruling. But a nine-member reconstituted panel of Supreme Court Judges unanimously affirmed the earlier decision of the seven-member panel.

The court subsequently dismissed the petition saying in its final judgment on Thursday March 4 that it was without merit.

The petitioner, Mr John Mahama was asking the court to order a rerun of the polls because in his view no presidential candidate obtained 5+ votes to win last year’s polls.

Speaking on the Key Points programme on TV3 Saturday March 6, Mr Ato Dadzie said “Any Ghanaian or every Ghanaian has the obligation to go to court to say this guy didn’t obtain 50+, and we are all obligated to defend the constitution.

“I think we are all caught up in the net or precedence because we are all going through the pink sheets debate.

“A party who participated in the election has said the other person didn’t obtain 50+. Who should answer that question?

“Are you suggesting that I should come and prove that he didn’t get 50+. That is a ridiculous situation,”

He further told Abena Tabi that “I will be disappointed with the supreme court on one ground that they failed to bring the EC chair to account to the people.”

A former Attorney General, Nii Ayikoi Otoo said on the same show that the petitioner had a bad case.

He explained that the burden of proof was on the petitioner and not the respondents.

“Nobody should say the cases was dismissed because the EC chair did nit mount the box,” he said adding that “You had a very bad.”