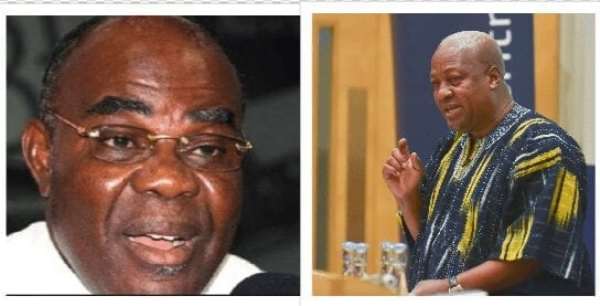 A former Attorney General, Nii Ayikoi Otoo has told Mr John Dramani Mahama not to blame his defeat in court on the refusal of the chair of the electoral commission to testify in the petitioner hearing at the supreme court.

Mr Ayikoi Otoo told Abena Tabi, host of the KEY POINTS on TV3 Saturday March 6 that Mr Mahama had a bad case for which it was dismissed by the Supreme Court.

He explained that the burden of proof was on the petitioner and not the respondents.

“Nobody should say the case was dismissed because the EC chair did not mount the box,” he said adding that “You had a very bad case.”

After the dismissal of the petition by the apex court on Thursday March 4, Mr Mahama said that the Supreme Court and Counsel for the 1st Respondent in the just-ended election petition hearing aided the Chair of the Electoral Commission (EC) Jean Mensa from accounting to the people of Ghana by evading cross examination.

Mr Mahama said “Ghanaians will also remember this 2021 Election Petition for that profound moment when the Chairperson of the Electoral Commission opted to evade public scrutiny.

“Everything was done in this trial to prevent the Commission from accounting to the people in whose name they hold office.

“Requests for Interrogatories were dismissed. A request to inspect documents in the possession of the Commission was turned down. The request for admission of facts was ignored.

“Worse still, she was aided by her counsel and the court to avoid explaining to the good people of Ghana from her own testimony, under oath in a properly constituted court of law, the errors she herself admits to have committed in the declaration of the 2020 Presidential election results.

“This is a clear stab in the heart of transparency and accountability to the sovereign people of Ghana. Whatever the reasons for not allowing Mrs Jean Mensa to testify or answer any questions, it leaves an embarrassing stain, not only on our justice delivery system but also, on the nation’s electoral system, which has deepened the grave doubts harboured by many Ghanaians about the true outcome of the December 2020 Presidential Election .

“The motto of Ghana’s Electoral Commission is Transparency, Fairness and Integrity – principles the key actors clearly failed to live up to on this occasion. The refusal to account to Ghanaians, further, sets the worrying precedent – and I do really worry about this dangerous precedent – that may allow other heads of state institutions to adopt an approach of opacity and non-accountability in their work.

“Just because they can rely on unconvincing interpretations of our laws to shield them from scrutiny in the near future. I hope and pray that time will prove me wrong. There is a famous legal maxim brought into common use by Lord Chief Justice Hewart in 1924, that ‘Justice must not only be done but should manifestly and undoubtedly seen to be done'”.