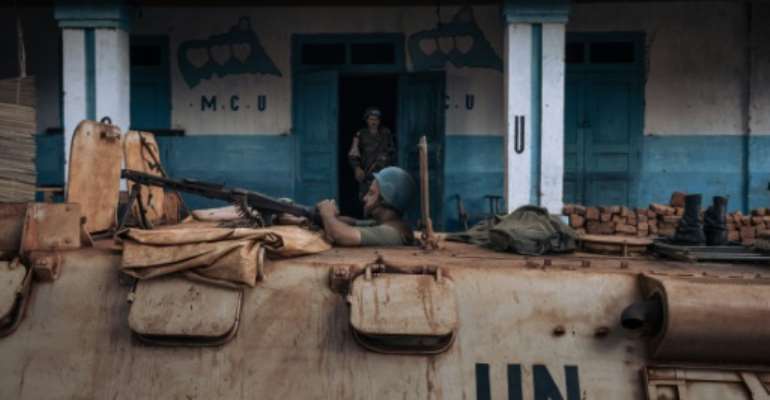 A UN peacekeeper patrols the Central African Republic city of Bangassou, which was seized by rebels. By ALEXIS HUGUET (AFP)

When the rebels came to the Central African Republic city of Bangassou, the area's top official Pierrette Benguere was forced to hole up in a UN base for a month.

Now Bangassou, formerly home to around 30,000 people, is a ghost town, its plight symbolic not only of the recent rebellion but also of a long-running struggle to reassert the presence of the state in a country where most of the territory is lawless.

For Benguere to speak to the people of Bangassou, the capital of the Mbomou prefecture of which she is the top representative, she went not to the city, but the forest that surrounds it.

Thousands of families who fled the violence have dug in there, cutting branches to weave shelters in the forest around 700 kilometres (435 miles) east of the capital Bangui.

They are among the 200,000 people displaced after six of the 14 armed groups that control two-thirds of the country reneged on a peace pact with President Faustin Archange Touadera in mid-December. 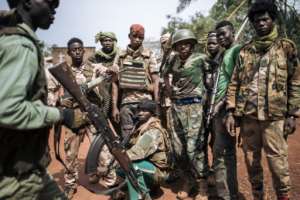 Six armed groups joined forces and launched an offensive, vowing to disrupt December's elections and march on the capital. By ALEXIS HUGUET (AFP)

The six armed groups joined forces and launched an offensive, vowing to disrupt December's elections and march on the capital in what the government called an attempted coup.

But the rebels could not stop Touadera's reelection in December 27's vote, in which not even one in two voters were able to cast their ballots because of insecurity.

Moscow, which backs Touadera, flew in the reinforcements in late December, while Rwanda also sent troops to bolster the ill-equipped and trained Central African army.

'In the midst of battle'

After several hours of fighting in Bangassou on January 3, the United Nations' MINUSCA mission joined the fray to bring the wounded, the uninjured and city leaders to the safety of the UN base.

There they found Benguere, who had taken refuge in the base a week before.

Earlier this month, the official was escorted by MINUSCA armoured cars when she visited the displaced families in the forest outside Bangassou. 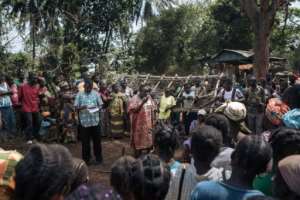 Pierrette Benguere, the head of Mbomou prefecture, speaks to those displaced from Bangassou by the violence. By ALEXIS HUGUET (AFP)

"We're in the midst of battle and MINUSCA is not going to abandon me," Benguere told the those who gathered around her during the visit.

"Whether they want to or not, the rebels will end up by leaving the area."

One could not blame some of those listening for not being totally convinced.

The fate of Bangassou mirrors what has happened to numerous towns in the CAR since civil war erupted in 2013.

Armed groups exercise control over large swathes of territory of the large nation covered with forests and savannah.

The state attempts to maintain enclaves with a semblance of administrative, police and judicial authority through a handful of civil servants who must live and deal with the rebel forces.

When a problem arises, the government personnel take shelter at the MINUSCA base.

The rebels pulled out of Bangassou on January 15 after an ultimatum from MINUSCA, but they remain omnipresent in the bush and in the villages, as well as controlling the roads. 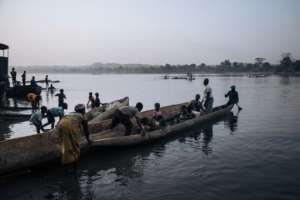 Central Africans displaced from their homes have had to find a new way to live. By ALEXIS HUGUET (AFP)

One self-proclaimed general, Mahamat Saleh, commands a unit of several dozen fighters holed up in the village of Niakari.

The village is deserted, like all neighbouring settlements since the rebels arrived.

"We're not here to attack the population," Saleh told AFP in an interview in January, wearing civilian clothes but surrounded by heavily armed youths.

"We attacked Bangassou because President Touadera has sold the Central African Republic," he said, adding that the rebels have one key goal: "Touadera's resignation".

In villages like Niakari, the shops, schools and health centres are shuttered. Militia fighters carrying their weapons frighten villagers.

"If they don't leave these places, it will be hard to resume classes. If the children stay at home, it will be the rebels of tomorrow that we're going to make," prefect Benguere warned.

Victoire Ngokpou, a psychologist at the Bangassou hospital, decided to move her family to safety on the far shore of the Mbomou river, in the Democratic Republic of Congo.

She rents a room in a clay house, surrounded by a refugee camp. 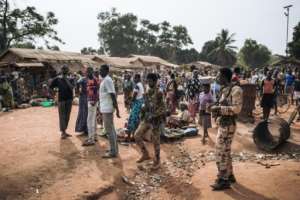 Armed groups exercise control over large swathes of territory of the large nation covered with forests and savannah. By ALEXIS HUGUET (AFP)

"But some of my colleagues at the hospital are packed into shelters made of plastic sheeting, with more than 15 people," she said.

Each morning, she crosses the river back to the CAR by canoe, then climbs on a motorbike, watched by Moroccan UN troops on guard duty at the border post.

Once at the hospital, supported by Doctors Without Borders, Victoire finds her office ringed by displaced people in search of protection.

"Quite a lot of people have lost their possessions, their relatives," the psychologist said.

"And then also, to hear the crackling of gunfire, some people cannot bear it."