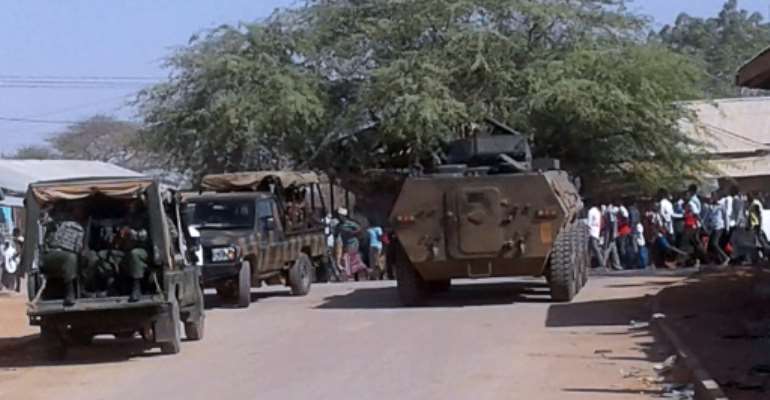 Kenyan soldiers arrive at the scene of a bomb attack claimed by Shabaab militants in Mandera in 2016. The county of Mandera is increasingly coming under the control of Al-Shabaab, the area's governor warned recently. By STRINGER (AFP)

Schools are shut due to an exodus of teachers, travel has become risky because of armed attacks and roadside bombs, and cellphone towers are regularly destroyed.

In the vast, arid northern corner of Kenya, bordering Somalia and Ethiopia, frustration is boiling over due to the growing strength of the Al-Qaeda-linked Al-Shabaab jihadist group in the region.

Some 1,000 kilometres (620 miles) and a world apart from the bustling capital Nairobi or Kenya's famed beaches and wildlife parks, the county of Mandera is increasingly coming under the control of Al-Shabaab, the area's governor warned recently.

In a rare public cry for help, governor Ali Roba published a long letter in January over the "undeterred movements of terror cells within the county", saying the government was "failing miserably" at stopping them.

He cited a recent Al-Shabaab attack on an ambulance carrying a pregnant woman, and the beheading of a local chief in December whose "head was thrown into a bush."

"A police post was attacked ... Mobile phone transmission stations are regularly attacked and masts felled leaving residents cut-off from communication," the governor wrote in a letter published in The Standard newspaper.

"Highways in Mandera are now controlled by Al-Shabaab that harasses travellers and target civil servants on the roads."

Situated on the Somali border, the often drought-stricken Mandera is a region where most of the population live off pastoralism, and is already one of the least developed counties in Kenya.

The governor has also said that 126 schools have yet to reopen in his county due to insecurity, after several attacks on "non-local" teachers in the largely Muslim area in recent years.

In a statement replying to the governor, northeastern regional commissioner Nicodemus Musyoki Ndalana said it was regrettable that Roba had chosen to address "delicate and complex national security concerns" so publicly, and defended the government's security investments.

"There is no denying that the county still experiences daunting scenarios each day due to its proximity to the Al-Shabaab corridor, but it is no longer the enemy's stomping ground."

Kenya shares a long eastern border with Somalia, and has been repeatedly targeted by Al-Shabaab since it sent troops to fight the Islamist group in 2011.

High-profile attacks on the Westgate shopping centre, a university, a hotel and business complex have left hundreds of locals and foreigners dead.

But many attacks over the years have also targeted police and civilians in the remote areas along that border, where Al-Shabaab has gained a foothold.

It was in Mandera in 2019 that two Cuban doctors were kidnapped by suspected Al-Shabaab militants. They have yet to be released.

"Sometimes it feels like we are actually in Somalia because of the criminals from the other country walking freely around and stopping vehicles to demand to know who is inside," said Mandera businessman Maalim Abdi, 48.

"We want to feel like the rest of the country. It should not be a curse to live at the border."

International Crisis Group researcher for the Horn of Africa, Meron Elias, told AFP that Roba's letter was "an overstatement" since government security measures would make it difficult for Al-Shabaab to control significant territory in his region.

"That said, the Al-Shabaab problem in northeastern Kenya is serious... The insecurity, marginalisation, lack of services and general terror caused by the group in the region is making life for citizens very hard."

She said Al-Shabaab has stepped up local recruitment, but it was hard to say if Somali or Kenyan citizens were carrying out the attacks.

"The group wants to further isolate northeastern Kenya from the rest of the country and prevent the government from delivering services and exercising control over the large, sparsely populated region."

According to Elias, the only place Al-Shabaab holds territory in Kenya is the Boni Forest in Lamu further south -- a border region also plagued by attacks.

Last month Al-Shabaab released a video of an attack in January 2020 on a military base used by US forces in the Lamu region, in which three Americans were killed and several aircraft and military vehicles destroyed.

Further adding to the woes of Mandera residents, a complex internal Somali political crisis that has drawn in Kenya has also led to episodes of fierce fighting on the frontier, which injured 12 last month and saw a missile hit a house in Mandera.

Nairobi and Mogadishu have had a falling out over Kenya's support of the leader of the semi-autonomous Jubaland region on the border -- who the central Somali government tried and failed to get rid of in an election last year.

Somalia in December severed diplomatic ties with Kenya for "interference" in its politics, and both countries have accused each other of incursions into their territory.

The businessman Ibrahim Gedi said "hardly two days goes without an incident (at the border), we have not known peace for some time now."

Fatuma Abdi, 45, a mother of six, said her family lives in constant fear in Mandera.

"We are so used to gunfire and loud blasts but we want them to stop. Businesses are not operating normally, most schools are closed. We want our life back."