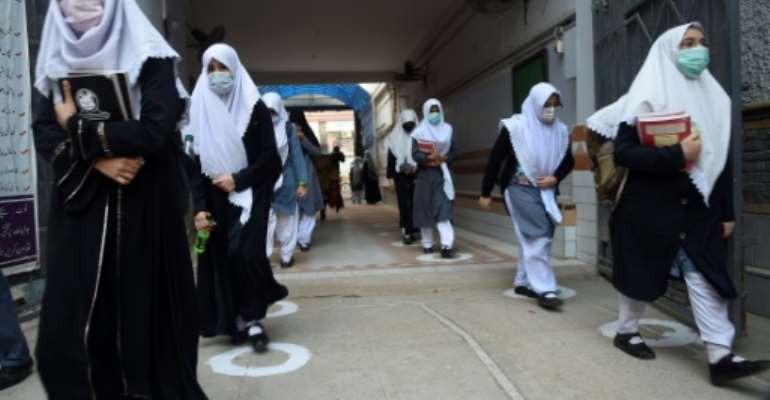 There have been growing concerns about different strains. By Rizwan TABASSUM (AFP)

France and Britain on Monday joined a growing list of nations starting mass vaccinations for all elderly citizens as London began quarantining arrivals to try and halt the spread of a new Covid-19 variant.

The French drive aims to cover all people over 75 and comes after Brazil and India, which figure among the worst-affected countries, administered their first jabs over the weekend.

Health Minister Olivier Veran says more than one million vaccinations are being targeted by January and between 2.4 and 4 million by February.

France had earlier offered vaccinations to residents of retirement homes and health workers on the frontline. 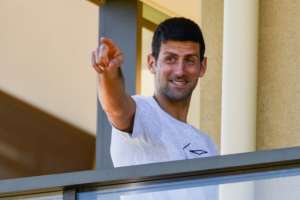 Men's world number one tennis player Novak Djokovic gestures from his hotel balcony in Adelaide, one of the locations where players have quarantined for two weeks ahead of the Australian Open tennis tournament in Melbourne. By Brenton EDWARDS (AFP)

Growing concerns over different strains of the virus have prompted governments to tighten curbs to stem a global death toll that has already crossed two million.

Russia is also due to start mass immunisations on Monday using its homegrown Sputnik V vaccine while Britain imposed a 10-day isolation and negative Covid tests on all travellers.

Arrivals will have to provide a negative Covid test taken within 72 hours of travel or be banned from entering the UK, which on Monday also expanded its vaccination campaign to people over the age of 70.

New and highly contagious variants have emerged in Britain, South Africa and Brazil and have set off alarm bells.

Across the European Union there have been concerns that delays in the delivery of Pfizer-BioNTech vaccine could further slow a campaign which critics have condemned as less agile than in the United States or Britain, a recently-departed EU member. 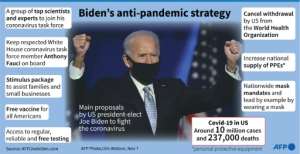 Main proposals by US president-elect Joe Biden to fight the coronavirus pandemic. By Gal ROMA (AFP)

US drugmaker Pfizer said it was working to "significantly" scale up production at its major plant in Belgium in the second quarter.

The latest wave in Japan and abroad has also cast doubt on whether the pandemic-postponed Tokyo 2020 Olympics can go ahead, but Suga repeated he was still committed to holding the Games as "proof of mankind's victory over the virus". 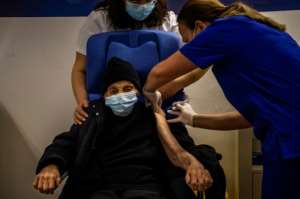 An elderly woman receives a vaccine in Greece. By ANGELOS TZORTZINIS (AFP)

"The feasibility of his goal is absolutely clear, there's no doubt about it," Fauci told NBC's "Meet the Press".

Biden has unveiled a $1.9 trillion stimulus plan to revive the economy of the US, where the new coronavirus has claimed over 397,000 lives.

Until vaccination is widespread, countries across the globe are still having to rely on lockdowns, curfews and social distancing.

Slovakia began a new round of nationwide screening and Malawi said it would impose its first restrictions, including night curfew, a cap on gatherings and mandatory face masks in public.

Nearly three million people in two cities in China's northeastern Jilin province were put under lockdown Monday after a surge in coronavirus cases linked to a travelling salesman.

The Australian Open in Melbourne has been delayed three weeks until February 8 because of the pandemic and has run into new problems.

Positive Covid-19 cases on three of 17 charter flights into the country mean 72 players have been confined to their rooms for the entire 14-day quarantine period.

Others are allowed out, but only for five hours a day, to train in bio-secure 'bubbles'. However several players took to social media to complain about the hotel food on offer.