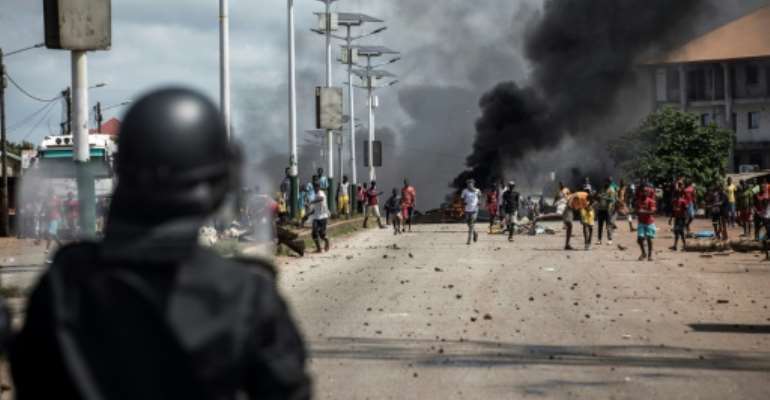 Dozens of people were killed during demonstrations, often in clashes with security forces. By JOHN WESSELS (AFP/File)

A judge in Guinea on Wednesday sentenced two critics of President Alpha Conde to a year in jail for inciting an insurrection, as rights groups fear a crackdown on the opposition.

Conde, 82, won a third presidential term in the poor West African nation in a violently disputed election on October 18.

He ran after pushing through a new constitution last March which allowed him to sidestep the country's two-term limit, provoking mass protests.

Dozens of people were killed during demonstrations, often in clashes with security forces.

On Wednesday, co-defendants Conde and Diabate were each sentenced to a year in prison on charges of inciting an insurrection.

Both are members of the FNDC opposition coalition which led protests against a Conde third term.

The public prosecutor had initially pushed for five-year jail sentences and heftier fines.

Hundreds of people were arrested during Guinea's election period, according to Amnesty International and Human Rights Watch, which have also criticised the use of deadly force against protesters.

Amnesty researcher Fabien Offner was unsure of the exact number of arrests, but said the wave was "unprecedented" in the former French colony.

Police arrested Conde and Diabate in September, ahead of the election, when political tensions were running high.

A third man, Roger Bamba, who was arrested with them, died in pre-trial detention.

Guinea's government has said Bamba died after an illness, but his family insists he was poisoned and has accused the government of committing a "state crime".

A former opposition activist himself, Conde became Guinea's first democratically elected president in 2010 and won re-election in 2015 and then again last year.

Critics accuse him of veering towards authoritarianism.