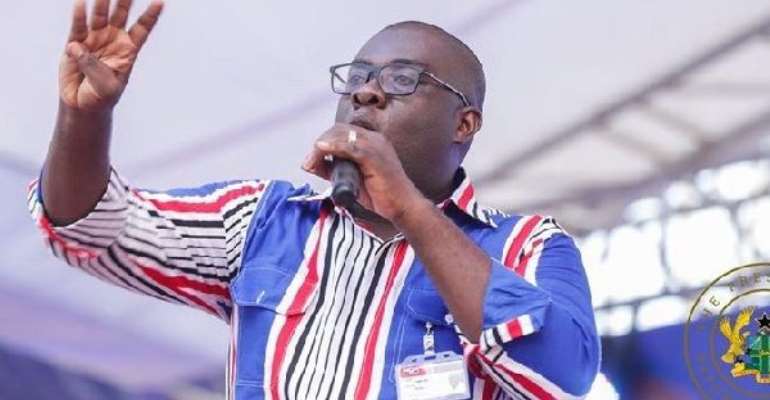 The Executive Director of Alliance for Social Equity and Public Accountability (ASEPA), Mr. Mensah Thompson is calling on President Akufo-Addo to appoint the National Organizer of the ruling New Patriotic Party, Sammi Awuku to serve in his government as Minister for Local Government.

According to Mensah Thompson, Sammi Awuku who was the immediate past Board Chairman of National Youth Employment Agency is the perfect person to man the Local Government ministry as he has a good relationship with the grassroots of the party.

"Sammy Awuku the National Organiser would be a better pick for local Government Ministry because of his relationship the grassroot of the party...," he wrote in a Facebook post.

Mensah Thompson is advocating fot Hon. Boakye Agyarko to given the Ministry of Energy, retain Ms. Gloria Akuffo as the Attorney General and Minister for Justice, Alan Kyeremanteng as Trade and Industry Minister and Hon. Kojo Oppong Nkrumah as Information Minister.

"Alan Kyeremanteng at Trade is not a bad pick, Kojo Oppong Nkrumah at Information is equally a good pick...," he stated.

KEEP NAPO FAR AWAY FROM THE ENERGY MINISTRY, REMOVE NITIWUL FROM DEFENSE

In the last few days a couple of names have been flying around as possible candidates for the various ministries, the daily guide has been reporting on this development and how some names have been earmarked for certain ministries.

Considering the relationship between the daily guide and the government, it is very difficult to ignore these speculations.

Except to seriously draw government’s attention to some of the names coming up for some key portfolios like that Energy Ministry, Defense and Finance.

We have heard that the former Minister for Education, Matthew Opoku Prempeh has been penned for the energy ministry.

Folks, it is very important that Government keeps the former Education Minister far away from anything Energy.

The sector is the life-blood of our economy, it requires someone with the technical expertise, great negotiations skills, great human relations and the diligence to work around the various administrative and technical bottlenecks in the sector, these are qualities “Napo” as he is affectionately called do not possess and therefore Government cannot risk him.

Especially in this difficult moment of Global Energy politics, Government must find a rather competent hand to handle the sector.

The military has also been used to perpetuate criminal activities such as the invasion of coalition centers during the elections and the shameful invasion of the chambers of Parliament, all of which makes the drastic cleansing of the image of the military very necessary.

And therefore keeping Dominic Nitiwul at the Defense Ministry would be a tacit endorsement of these events by President Akufo-Addo and his Government.

Alan Kyeremanteng at Trade is not a bad pick, Kojo Oppong Nkrumah at Informations is equally a good pick, but remove Amoako Attah from Roads, Cecelia Dapaah from Sanitation, Hajia Alima from Local Government.

Sammy Awuku the National Organiser would be a better pick for local Government ministry because of his relationship the grassroot of the Party, bring Boakye Agyarko back to Energy, retain Gloria Akufo as Attorney General and remove Godfred Dame as Deputy Attorney General.

Bring Martin Agyei Mensah Korsah to the Lands and Natural Resources Ministry and remove incompetent Kweku Asomah Cheremeh who have failed the fight against galamsey woefully, remove Ken Ofori-Atta from Finance as well and bring in experienced Osei Akoto for the second term.

Considering the current strength of Parliament, Government should be extra dilligent on the candidates they present for the various portfolios or face a very difficult first quarter.