The cronies of Tunisia's Ben Ali: where are they now? 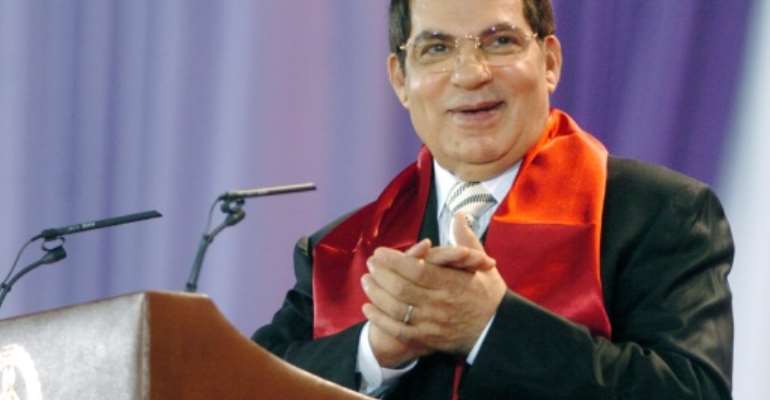 After he was toppled and fled Tunisia in 2011, the late dictator Zine El Abidine Ben Ali was sentenced in absentia to decades in prison. By FETHI BELAID (AFP/File)

Ten years since an uprising toppled Tunisian dictator Zine El Abidine Ben Ali, his in-laws, who ran a mafia-like empire that once pocketed a fifth of national private sector profits, are scattered across the world.

Few have faced justice. Here is an overview.

After he was toppled and fled the country in 2011, Ben Ali was sentenced in absentia to decades in prison for ordering killings and torture during his rule and a bloody crackdown against the revolt.

He was also found guilty of embezzlement, corruption and a string of other crimes.

He died in September 2019 in exile in Saudi Arabia, and was quietly buried in the presence of his second wife, Leila Trabelsi, and their children.

Trabelsi, nicknamed "the hairdresser" due to her modest beginnings, was one of the most-hated figures of the Ben Ali regime. Her family exploited her position to build a vast, corrupt business network.

She and her young son live in Jeddah along with her daughter Nessrine, a divorcee who recently remarried to ostentatious Tunisian rapper K2Rhym, before press reports that she had divorced again.

Trabelsi's brothers are suspected of having led her family's monopolisation of the Tunisian economy. Under Ben Ali, they gradually came to dominate the retail, real estate, communications, media and car import sectors.

The following are key figures:

A fabulously wealthy businessman described in a leaked 2008 US diplomatic cable as Ben Ali's "most notorious family member", Belhassen fled by yacht to Italy on January 14, 2011 -- the same day Ben Ali took flight to Saudi Arabia.

Belhassen flew in a private jet to Canada and lived in a plush Montreal apartment until 2016.

When he was denied asylum, he simply disappeared.

After three years on the run, Belhassen was arrested in March 2019 in the south of France. Tunisia has sought his extradition, and an Aix-en-Provence appeals court is set to rule on the case on January 27.

He is accused of fraud, embezzlement and laundering criminal proceeds.

Imed, a nephew of Leila Trabelsi, was arrested as he attempted to flee to France the day the regime fell.

The most prominent Trabelsi to have faced trial in Tunisia, he was sentenced to 100 years in prison, including on multiple charges of corruption.

In 2017, he apologised on national television for the endemic corruption under Ben Ali, describing how the clan bribed and bullied its way to monopolies on everything from the real estate sector to banana imports.

Trabelsi said he "apologised from the bottom of my heart" and offered to pay back his ill-gotten gains, but he remains in prison.

Two other brothers of Leila Trabelsi have died in jail: Moncef and Mourad.

After the revolution, he sought refuge in the ultra-rich Gulf state of Qatar, but was expelled and headed to the Seychelles.

The Indian Ocean nation gave him residency in 2013, a decision Tunisia called "unacceptable".

In 2017, he proposed paying over $200 million in exchange for the right to return to Tunisia. The government did not respond.

El Materi's father, army officer Moncef El Materi, was arrested on an international arrest warrant when a cruise ship he was aboard stopped in France in 2017.

The following year a court rejected Tunisia's appeal for his extradition to face charges of money laundering.

The ex-husband of Cyrine Ben Ali, a daughter of Ben Ali from his first marriage, Mabrouk is a discrete but influential businessman.

He and his brothers ran one of Tunisia's main conglomerates, with stakes in the local franchises of retail giant Monoprix, dealerships for Fiat and Mercedes, and banking interests.

Accused of corruptly benefiting from ties with Ben Ali, in 2011 he saw some of his assets frozen.

However, he was able to retrieve some, including his stake in French telecoms group Orange last year, after the European Union controversially lifted sanctions against him, paving the way for Orange to buy back his shares.

The husband of Ben Ali's second daughter Dorsaf, Chiboub was formerly the head of popular football club Esperance de Tunis. After fleeing to the United Arab Emirates following the revolution, he returned in 2014 to settle accounts with the Tunisian judiciary.

Chiboub spent a year in prison and reached a deal to pay back undue gains as well as paying a fine, in exchange for investigations against him being dropped.

But he was arrested again this summer, accused of not paying the full amount.