Opposition in troubled I.Coast to take part in elections 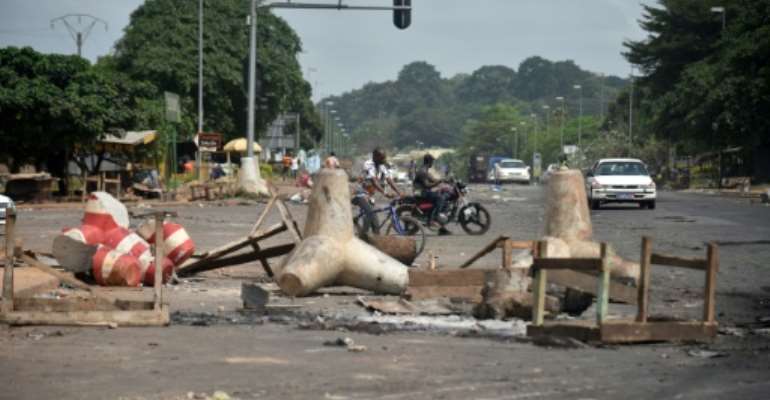 The remains of a street barricade in Yamoussoukro, the Ivorian capital, after post-election clashes. By SIA KAMBOU (AFP)

Opposition parties in Ivory Coast announced Thursday they would take part in legislative elections on March 6, a move that further eases political tensions after deadly clashes.

Presidential elections on October 31 were marred by an opposition boycott, calls for civil disobedience and violence that claimed scores of lives.

"The coalition of opposition platforms and political parties would like to solemnly announce that it will take part in the upcoming elections," its spokesman, Georges Armand Ouegnin, announced.

"Our coalition will move ahead in tight ranks, with a joint strategy bringing all actors together to block the RHDP, which seeks to grab all the powers and subjugate the public," Ouegnin said.

The RHDP is the party of President Alassane Ouattara, 78, who won a landslide victory in the October 31 poll thanks to the boycott.

The opposition said that by bidding for a third term, Ouattara had sought to subvert two-term constitutional limits.

Ouattara's camp argued that a 2016 revision of the constitution reset his term counter to zero, allowing him to seek a third term.

Pre- and post-election violence claimed at least 85 lives, with around 500 injured, according to an official toll.

The bloodshed revived traumatic memories of the aftermath of disputed elections in 2010.

In recent weeks, though, the political mood has eased, thanks to a key meeting between Ouattara and his long-standing rival, Henri Konan Bedie, 86, as well as talks on electoral reform and other opposition demands.

"The coalition invites the government and institutions concerned to pursue dialogue, negotiation, so that every issue is resolved for transparent, credible and calm elections," Ouegnin said.

Ouattara has also held out an olive branch to his predecessor, Laurent Gbagbo, who was forced out in 2011 after he refused to accept defeat at the ballot box.

Gbagbo and his former right-hand man, Charles Ble Goude, 48, were tried on charges of crimes against humanity by the International Criminal Court (ICC) in The Hague.

They were acquitted in 2019, and remain free pending the outcome of an appeal.

On December 4, Gbagbo's attorney said he had obtained an ordinary passport and a diplomatic passport from the Ivorian authorities and planned to return home.

Gbagbo's FPI already announced on December 23 that it would take part in the March elections, ending a decade-long boycott of the electoral process.