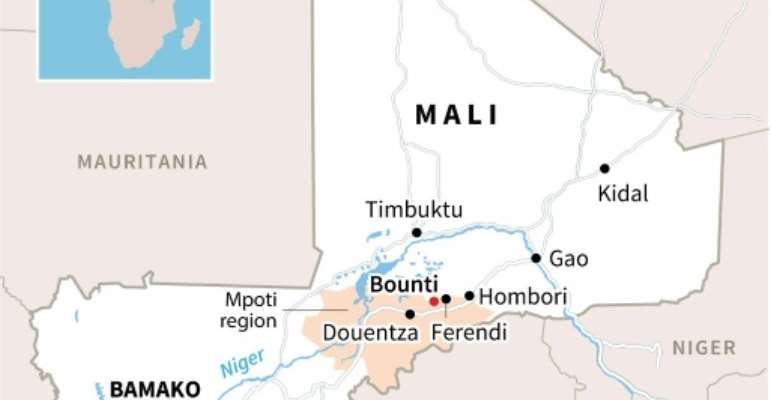 Map of Mali locating Bounti, where villagers say they were attacked on Sunday. By Manel MENGUELTI (AFP)

Two nearby villages were hit in separate attacks in central Mali at the weekend, Doctors Without Borders said Wednesday, potentially shedding light on a controversy over an attack on a wedding.

France's armed forces have said they killed dozens of jihadists in a strike by warplanes in the region on Sunday, while villagers and a local group said up to 20 members of a wedding party had been killed by a helicopter.

The two accounts -- which could carry hefty implications for France's Barkhane anti-jihadist force -- are so divergent that there has been speculation of two incidents at separate locations.

In a statement, Doctors Without Borders (MSF) said it had cared for "eight seriously wounded people following bombardment of their villages in Bounti and Kikara in central Mali" on Sunday.

The medical charity, which works extensively in the troubled region, also said that the wounded had "bullet wounds and skin lacerations caused by explosions."

Several villagers in Bounti said that a wedding party there came under fire on Sunday from a single unidentified helicopter.

One of them, Ahmadou Ghana, said 19 people died, including two of his brothers, and several others were seriously wounded.

Separately, French military headquarters said on Tuesday that fighter jets had "neutralised" dozens of jihadists in central Mali after the group had been tracked for days.

It said the operation was a single strike that took place at around 1500 GMT Sunday in a sector where Bounti and Kikara are located, although it did not give the precise location.

It ruled out any connection to an attack on a wedding, and on Wednesday added that Barkhane had not used a helicopter in the strike.

Independent confirmation of reports is difficult in a remote area where many jihadists operate.

Mali's authorities have not commented on the matter.

The only armed forces that carry out offensive air operations in Mali are the national armed forces and Barkhane.

Bounti and Kikara lie 15 kilometres (nine miles) apart in the Mopti region, which is about 600 kilometres (370 miles) from the capital Bamako.

France's military intervention in the Sahel dates back almost exactly eight years, to January 2013, when it forced the jihadists out of northern Mali.

It has 5,100 troops in the Barkhane force -- a number that French President Emmanuel Macron is under pressure to cut.

A total of 5 French troops were killed by roadside bombs on December 28 and January 2, bringing the mission's losses to 50.

Ghana may be first to accept LGBTQI in Africa just like demo...
6 minutes ago