US criticises arrest of Reuters cameraman in Ethiopia 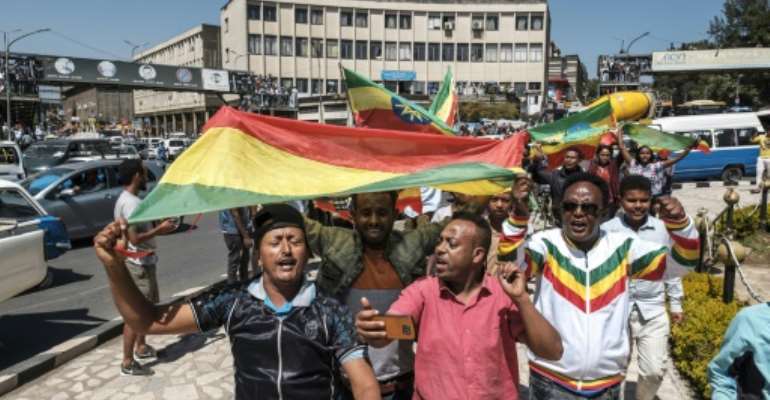 Ethiopians demonstrate in November 2020 in support of the armed forces amid an offensive in the Tigray region. By EDUARDO SOTERAS (AFP/File)

Ethiopian police arrested a Reuters cameraman last week and have held him in custody without charge, the international news agency said Monday, drawing criticism from the United States.

Kumerra Gemechu, 40, was handcuffed and taken away in front of his family last Thursday at his home in Addis Ababa by 10 armed federal police officers who did not give a reason for his arrest, Reuters said in a statement.

"At a brief court hearing on Friday, where no lawyer was present, a judge ordered Kumerra's detention for a further 14 days to give police time to investigate," Kumerra's family said as quoted by Reuters.

Reuters editor-in-chief Stephen J. Adler said the agency was not aware of any basis for Kumerra's detention, and praised his fair and impartial reporting.

"Journalists must be allowed to report the news in the public interest without fear of harassment or harm, wherever they are," Adler said on Twitter on Monday.

"We will not rest until Reuters cameraman Kumerra Gemechu is freed."

His phone, a computer and other electronic and personal items were seized during the arrest, his family said.

The United States, an ally of Ethiopia, voiced alarm both at Kumerra's arrest and the treatment of other journalists in Ethiopia.

"Freedom of the press is fundamental to any democratic society. I am extremely concerned by continuing reports of intimidation of journalists in Ethiopia," Tibor Nagy, the top US diplomat for Africa, wrote on Twitter.

Kumerra had been reporting on the conflict in Ethiopia's Tigray where Prime Minister Abiy Ahmed, the winner of last year's Nobel Peace Prize, on November 4 ordered the military to confront the ruling party of the dissident northern region.

Ethiopia restricted media access to the conflict-hit region and Tigray was under a total communications blackout for six weeks as the conflict raged between federal and regional forces.

The fighting in Tigray has left thousands dead, according to the International Crisis Group think tank, and sent tens of thousands of refugees streaming across the border into Sudan.

"Kumerra covered the Tigray conflict, but Reuters was unable to determine whether his arrest was connected to his work. Government officials did not respond to questions from Reuters about whether his coverage was at issue," the news agency said.

Reuters also said Kumerra's arrest followed the beating of one of its photographers in Ethiopia by two federal police officers on December 16.

The Committee to Protect Journalists this month identified Ethiopia as a top jailor of reporters, saying at least seven media workers were behind bars in the Horn of Africa nation.

Most were accused of crimes against the state, the US-based watchdog said in its annual report, but authorities would keep extending their detention in order to investigate without producing evidence.