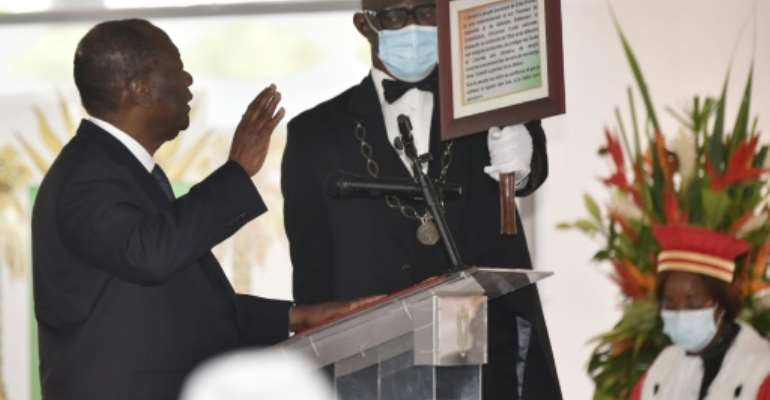 The Ivorian opposition boycotted the election, which Ouattara won with more than 94 percent of the vote. By SIA KAMBOU (POOL/AFP)

Ivorian President Alassane Ouattara was sworn in for a controversial third term on Monday, urging the opposition to help defuse tensions after election-related violence claimed 85 lives in the West African powerhouse.

The ceremony was attended by 13 African counterparts as well as French Foreign Minister Jean-Yves Le Drian and former French president Nicolas Sarkozy -- but boycotted by the opposition, as was the October 31 election that returned Ouattara to power.

"I ask all political parties to seize this new opportunity... to defuse tensions through dialogue," the 78-year-old president said, noting publicly for the first time that legislative elections will be held in the first quarter of 2021.

Ouattara promised the creation of a national reconciliation ministry in the next government, while stressing that "violence and intolerable acts... should not go unpunished".

It was a tacit warning to several opposition leaders who were arrested in the wake of the election, with legal proceedings over "sedition" launched against them.

He also announced the dissolution of a rival government, the "National Transition Council", that the opposition set up after the election, a move that landed spokesnan Pascal Affi N'Guessan in jail.

Bedie, 86, a former president himself, stopped short of recognising Ouattara's re-election with more than 94 percent of the vote.

Ouattara and his supporters had argued that a 2016 revision of the constitution reset his term counter to zero, allowing him to seek a third term.

Pre- and post-election violence has claimed at least 85 lives since August, with around 500 injured, according to an official toll.

For many Ivorians, the bloodletting revived painful memories of the aftermath of disputed elections in 2010.

Ouattara has asked his prime minister, Hamed Bakayoko, to resume discussions with the opposition on the composition of the Independent Electoral Commission (CEI).

The opposition is demanding a reform of the body, which it accuses of bias.

In his speech on Monday, Ouattara said he would devote his third term to education and the social safety net as well as reconciliation, vowing to lift three million people out of poverty.

While the country of 25 million has enjoyed strong economic growth and the completion of several infrastructure projects under Ouattara, critics say the poorest have been left behind.