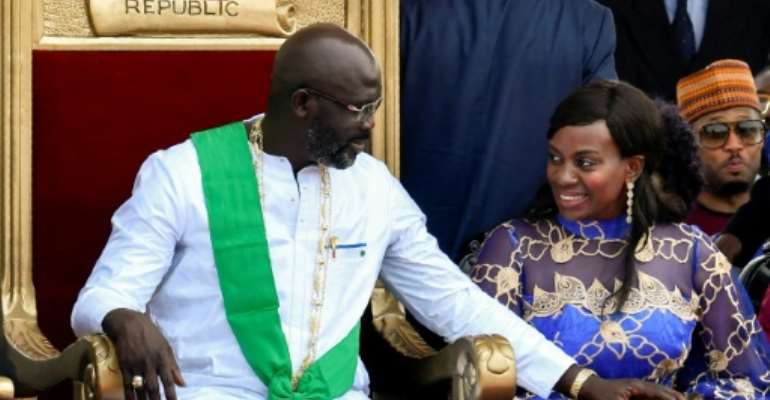 President Weah and his wife Clar, pictured at his inauguration in January 2018. By ISSOUF SANOGO (AFP)

Liberia's opposition has taken the lead in a midterm senatorial election, according to provisional results announced Thursday, in a blow for President George Weah.

Voters went to the polls on Tuesday to choose new senators, in an election that occurred alongside a referendum on reducing presidential terms and allowing dual nationality.

Many view the senate race and referendum as a bellwether of support for Weah, a former football icon who has faced criticism as president for poor living standards in the West African state.

On Thursday, Liberia's National Elections Commission (NEC) released provisional results from eight counties out of 15, with Weah's ruling party leading in only one of those.

Opposition candidates were leading in five out of the eight counties, and independents in two.

Crucially, the opposition is also leading in the country's largest county, Montserrado, with about 20 percent of the ballots counted.

Darius Dillon, a vocal Weah critic from the Collaborating Political Parties (CPP), an opposition coalition, won about 60 percent of those votes in Montserrado.

The county is home to the capital Monrovia, as well as most of the voters in the nation of some 4.8 million people.

Dillon had already won the senate seat in a 2019 by-election, but stood again this year when his predecessor's term ended.

Weah's Congress for Democratic Change party campaigned heavily in Montserrado in a bid to win the seat back.

The 54-year-old president was born in Monrovia's slums and rose to international football stardom before winning election to his country's highest office in 2018, inspiring many.

However his popularity has waned in the face of persistent economic woes.

Liberia is still recovering after back-to-back civil wars from 1989 to 2003, and West Africa's 2014-16 Ebola crisis. It also suffers from soaring inflation, and regular cash and fuel shortages.

Final results for the senatorial election and referendum are expected within several weeks.