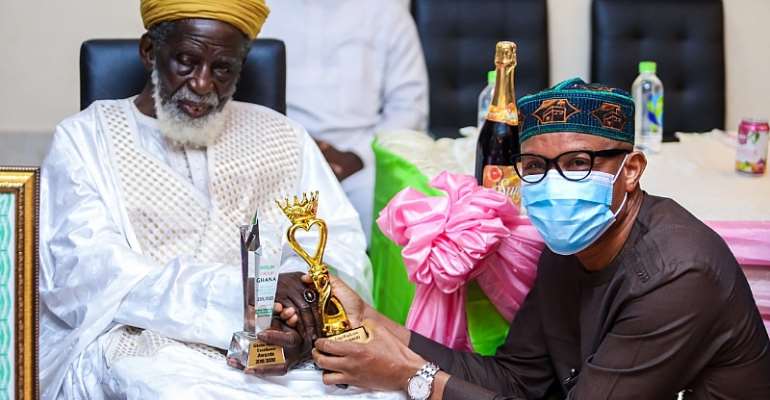 The Minister for Inner Citi and Zongo Development, Sheikh Mustapha Hamid has added a topmost award to his political career as the Best Zongo Minister and the Best Muslim Politician of the year 2019/2020 for his great leadership to the people of Inner Cities and Zongo.

The ceremony was also attended by some powerful traditional leaders from the Zongo communities across the Country.

The Minister also received the Muslim Heroes award for his great contribution to the Zongo communities through his Ministry.

Presenting the awards to the Minister, the Coordinator of Ghana Muslim Excellence Awards, Alhaji Halidu Abubakar Galaxy stated that Sheikh Mustapha Hamid has contributed his quota diligently to the people of Zongo.

He said the Minister has lifted the face of Zongo and as well as united and brought together the Zongo Chiefs under one umbrella in a bid to develop the Zongos.

He added that the humble and respectful nature of the Sheikh Mustapha Hamid has made his Ministry a place for all Zongos to share their problems.

This he said has made the Zongo Ministry a very powerful and attractive entity that's working in the interest of the people it is mandated to serve.

The awards he said will be a testament for the Minister to continue his effort to build and endear the name of Zongo to the highest level in Ghana and the World at large.

Hon. Sheikh Mustapha Hamid, who was the special guest of honour during the Ghana Muslim Excellence Awards at the Contonment Political Central Mosque in Accra, was therefore deemed fit to receive the award following his great leadership as the Minister for Inner Citi and Zongo Development.