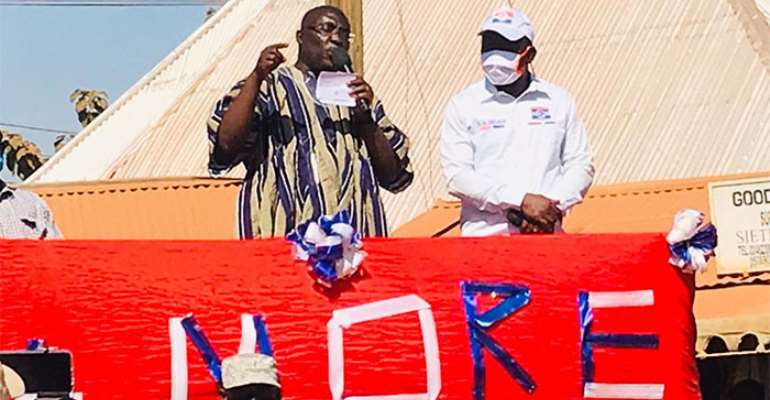 Dr. Bawumia dared Mr Mahama and the NDC to mention any development project in the Nakpanduri-Bunkpurugu constituency.

“John Mahama who was in office for 8 years and can't show what he did for the Bimobaland is coming to say NPP who is doing very well has not done anything for Bimobas. The next time former president Mahama comes to Bunkpurugu constituency with his Munafiki politics you should ask him what he did for the people of Bunkpurugu constituency and for the people of Bunkpurugu , he should list the projects and let's start the debate.”

“The NPP appointed a Bimoba man as the North East regional minister, Solomon Boar and deputy attorney general Joseph Kpemka, can John Mahama tell us the Bimoba man he appointed in his 8 years so stop the Munafiki tribal politics, as a former president we don't expect you to do these type of politics if you have something to show then show it but don't talk about tribal politics .”

He indicated that the NPP has implemented the Free SHS policy, PFJ, One Constituency One Ambulance, One Village One Dam, Nabco, 1D1F among others which has transformed the lives of Ghanaians and the Bimoba community as well.

Addressing the people of Bunkpurugu in the Nakpanduri-Bunkpurugu constituency, Dr. Bawumia said the NDC could not manage the country's economy and for that matter had to cancel a lot of programmes.

He told the chiefs and people of Bunkpurugu that the NPP government will soon implement a policy to support students who are able to pass their SHS examination and cannot afford to pay for their tertiary education.

“Any students who passes their exams and cannot pay for the tertiary fees government will give them a loan to pay and go to the university so we are going to implement this policy right from next year.”

The Vice President said President Akufo-Addo cares for Ghanaians especially those from poorer parts of the country and assured that government will ensure that children who are not privileged receive education to the university level.

“ our parents don't have to sell their properties to pay for school fees so they will all go to school for free so that we all get the benefit of it.”

Dr. Bawumia noted that President Akufo-Addo is running an inclusive government adding that every Ghanaian will be included in every development of the country saying what the NPP government has done in the Nakpanduri-Bunkpurugu constituency is unprecedented.

He urged the people of the Nakpanduri-Bunkpurugu constituency to vote massively for President Akufo-Addo and the NPP parliamentary candidate Solomon Boar to do more in the constituency.