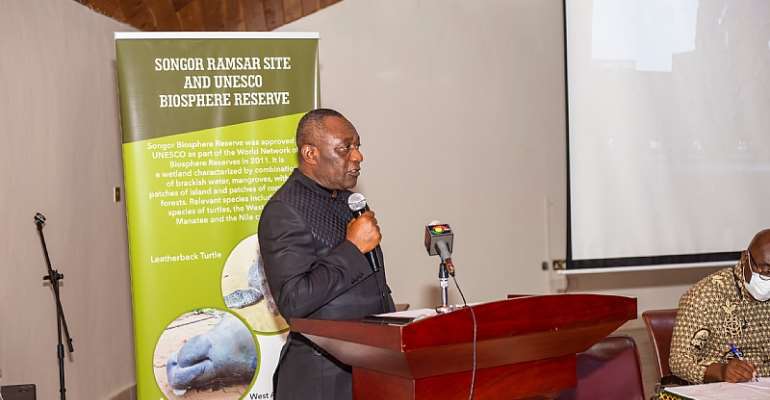 The United Nations Educational, Scientific and Cultural Organization (UNESCO), has supported the Environmental Protection Agency (EPA), to organize a national forum on biosphere reserves at the Songor Ramsar Site and Biosphere Reserve in Ada, on 19 November 2020.

The theme for the forum was “Ecosystem Services and Benefit Sharing in UNESCO Biosphere Reserves: Our Role as Stakeholders”. Biosphere reserves are sites that include terrestrial and aquatic ecosystems that promote solutions reconciling the conservation of biodiversity with its sustainable use.

The forum was organized to enhance awareness on the MAB Programme and Ghana’s biosphere reserves; to provide a platform for stakeholder networks and establishment of alliances particularly in respect of research and funding; and to highlight the role of stakeholders particularly the youth in management of biosphere reserves and their relevance for attaining the SDGs.

Mr. Abdourahamane Diallo, UNESCO’s Representative to Ghana, in a speech delivered at the forum advocated for the need to use multistakeholder, interdisciplinary and holistic approaches when designing management plans for ecosystems.

He added that stakeholders must stop working in silos, in order to bring to bear all available expertise towards addressing ecosystem management challenges.

He assured participants that UNESCO would continue to support its member states to undertake studies to compare the dynamic interrelationships between natural/near-natural ecosystems and socio-economic processes. In particular, in the context of accelerated loss of biological and cultural diversity with unexpected consequences that affect the ability of ecosystems to continue to provide services critical for human well-being.

In a speech read by Mrs Cynthia Asare Bediako, Chief Director, MESTI, on behalf of the Minister of MESTI, she reminded participants that humans are an integral part of ecosystems.

She gave examples of the benefits or services humans obtain from ecosystems, such as food and water, and climate regulatory processes.

She stated that the term biosphere reserve is not just a designation but a long-term responsibility and project, which must be supported by all stakeholders.

She also advised the youth to take interest in biosphere reserve related activities and to support their implementation.