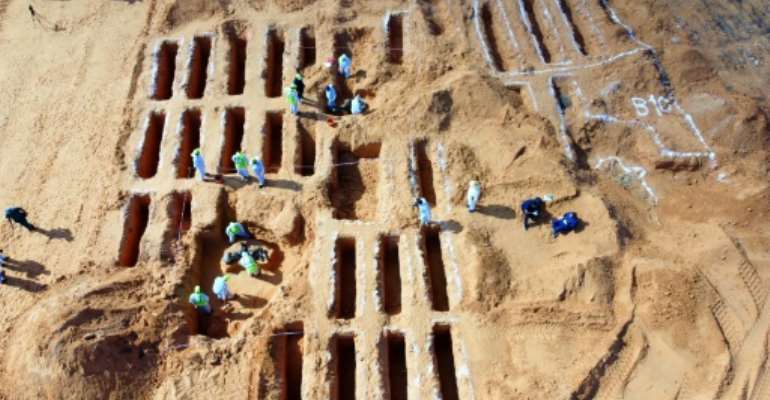 Libyan members of the team excavating mass graves investigate remains in Tarhuna, where 17 bodies have been discovered. By Mahmud TURKIA (AFP)

The US Treasury announced sanctions Wednesday on a Libyan rebel militia loyal to eastern strongman Khalifa Haftar which is allegedly behind multiple murders, kidnapping and torture.

The Treasury said Mohamed al-Kani and the Kaniyat militia "is responsible for the murder of civilians recently discovered in numerous mass graves in Tarhuna."

Tarhuna was the main staging point for Haftar's abortive offensive aimed at seizing the capital from the UN-recognized Government of National Accord.

On November 7 the government's missing persons authority said it had unearthed 17 bodies from a newly-discovered mass grave near the town.

Government forces have blamed Al-Kani's militia, and have said that victims showed signs of being tortured and burned, and some buried alive, according to the Treasury.

"Mohamed al-Kani and the Kaniyat militia have tortured and killed civilians during a cruel campaign of oppression in Libya," Treasury Secretary Steven Mnuchin said in a statement.

The sanctions seek to freeze any property of those named under US jurisdiction and to block their access to the world trade and banking system.