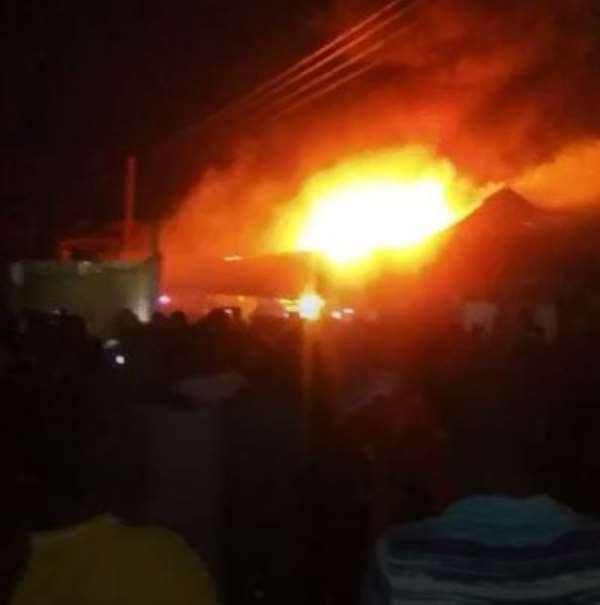 A warehouse containing furniture for exports has been completely razed down by fire at Kaase Angola in the Asokwa Municipality of the Ashanti Region.

The fire which started around 7 o’clock Thursday evening also spread to another warehouse containing bags of rice, cooking oil, and other confectionaries destroying a vast area of its contents.

It took three fire tenders deployed to the scene about two hours of constant replenishing of water to bring the fire under control.

An eye witness told reporter Ivan Heathcote–Fumador the fire started from the furniture hub where the owners had finished furniture ready for export.

“We saw the fire in the building when we were having church service here so we rushed there but it was locked. By the time we could break it open, the fire had gotten out of control and all its expensive content was destroyed so we had to run away and call for the fire service,” he narrated.

Firemen from the Ashanti Region Fire Command joined the ground control as the site shared boundaries with a gas fuel station, a part of the Kumasi Abattoir and the Latex Foam Complex.

The area is also marked a high-risk zone for fire outbreaks as the Bulk Oil Storage and Transport Company has its tanks in the same enclave with other wood factories, fuel stations, and fitting shops within close proximity.

Regional Second in Command for the Fire Service, ACFO Henry Giwah expressed concern the whole enclave had only one unserviceable hydrant.

“The problem has been with water supply. We had to use three fire tenders and they had to be running helter-skelter to get more water. There are no hydrants around. The only one around is not functioning properly,” he indicated.

The assembly member for the Kaase electoral area Akwasi Danso indicated that the risk of fire in the enclave has been a source of concern to his office.

He admitted, however, that the assembly has not been to the place in the past six months to continue with a fire safety education is initiated.