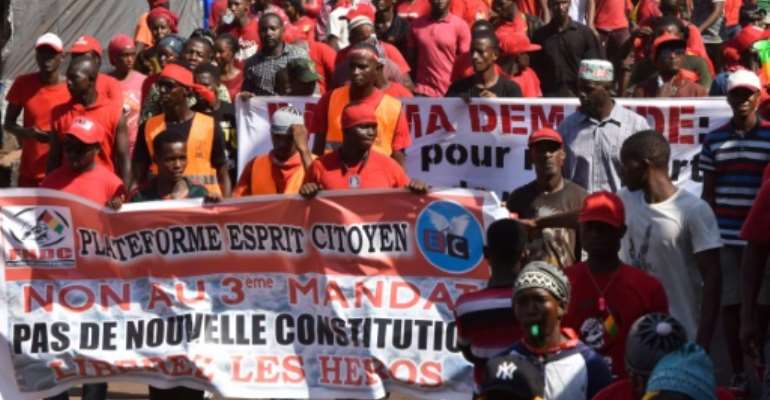 Guinea's 82-year-old Alpha Conde drew masses of people into the streets in rolling protests against his controversial -- and eventually successful -- bid for a third term. By CELLOU BINANI (AFP/File)

Billionaire philanthropist Mo Ibrahim on Monday hit out at the Nigerian government for a crackdown on unarmed civilians at a protest against a hated police unit, that spilled over into wider calls for better governance.

But the military last week denied shooting live rounds, insisting that soldiers only fired blanks at the crowds who had gathered in defiance of a curfew.

"I really don't understand why the government needed to attack peaceful demonstrators," Ibrahim, a Sudanese-British businessman who made his fortune in telecoms, told AFP.

"This is what bothers me, this closing of space, of civil society. The right of people to stand up and say their views is a sacred right, and that was totally unacceptable."

Ibrahim was speaking after his foundation suggested that governance progress had slowed across Africa for the first time in a decade, even before the coronavirus pandemic hit.

In particular, the report by the Mo Ibrahim Index of African Governance, published every two years, found that the commitment to democracy and civil rights had faltered.

The index scores each African government on criteria including anti-corruption measures, protection of civil liberties and caring for the environment.

More than 60 percent of Africans live in countries that made progress in good governance between 2010 and 2019, this year's report said.

But progress slowed in the last five years and this year, for the first time in the last 10 years, the combined score for all the countries fell year-on-year.

The foundation, set up in 2006 to focus on the need for good political leadership and public governance in Africa, cited growing curbs on people's ability to exercise their democratic rights and take part in civil society.

The results use data from last year and do not therefore include the impact of the coronavirus.

Since the pandemic began, some elections have been postponed, the report said. But "the continent had been going through a deterioration of civil society space, participation and rights long before Covid-19".

There is "an increasingly precarious environment for human rights and civic participation" as well as a "deteriorating security situation," it added.

Ibrahim told AFP Nigeria's authorities had deliberately conflated peaceful protests with looters, instead of seeing them as two separate events.

Civilians had the right to speak out and the government needed to listen, he added, noting that Africa's better-connected young were increasingly questioning their ageing leaders.

Elsewhere in Africa, there has been deadly unrest in Guinea and Ivory Coast sparked by constitutional changes pushed through by incumbent presidents to enable them to stay in power.

Post-election clashes have claimed scores of lives in Ivory Coast and at least 21 in Guinea, where several opposition figures are in police custody over the violence.

Since 2015, countries' scores for security and rule of law and participation have slowly worsened while scores for rights and inclusion have fallen more sharply, the report said.

South Africa, ranked sixth, has declined over the decade, falling more steeply since 2015, and is on a "concerning trajectory", the report found.

The country's former president, Jacob Zuma, was forced out by the ruling African National Congress (ANC) over a slew of corruption scandals.

Only one country, Ethiopia, has made progress across all areas measured over a decade, the report said.

But the continent's second most populous country is now embroiled in a military conflict pitting the federal government against the dissident northern region of Tigray.

Meanwhile, coronavirus now threatens gains in economic opportunity across the continent, he added.

"Covid has exposed inequality like no other factor before... If you are well off, it's different.

"If you're a manual worker earning a living day by day, living in a small apartment with three kids and you're being locked up with no support from the government, it's hell."