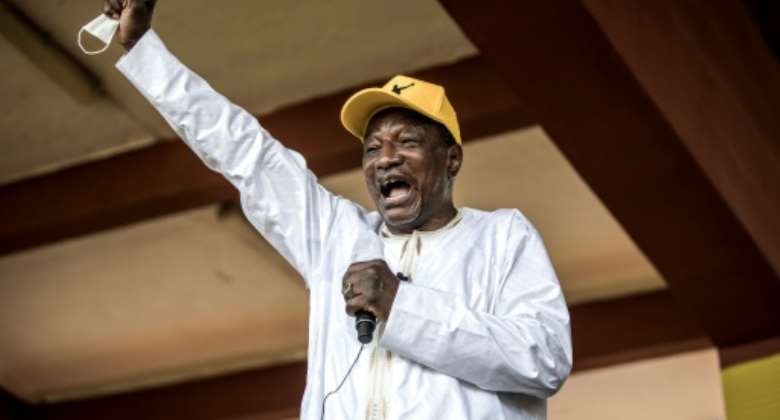 Guinea's Constitutional Court on Saturday declared incumbent Alpha Conde had been reelected for a controversial third term as president at the age of 82, while security forces surrounded his main opponent's house following deadly clashes.

With 59.5 percent of the votes cast, Conde's support was above the absolute majority needed to win in the first round, judges found, throwing out challenges to the October 18 ballot from figures including his main opponent Cellou Dalein Diallo.

But the 68-year-old insists that data his activists gathered at polling stations shows he won the vote and is the victim of "large-scale fraud".

While observers from other African countries have backed the official results, France, the European Union and United States have cast doubt on them.

Diallo had already alleged ahead of Saturday's decision that the constitutional court was beholden to Conde.

His home was surrounded by security forces as the ruling was read out.

Heavy anti-riot vehicles and pickups blocked the road leading to the opposition politician's house in the suburbs of capital Conakry, while security forces kept people at a distance.

Diallo had originally planned a press conference for the early afternoon.

There is no way for Conde's opponents to appeal the constitutional court decision, leaving the path clear for the president to begin a new six-year term -- with the option for a second under a new constitution introduced in March.

Even before the election, the incumbent's announcement that he would stand again triggered months of demonstrations and violence claiming dozens of lives, almost all of them civilians.

Conde had said in March that the new constitution was designed to "modernise" the country's institutions and offer a greater role for groups like women and the young.

But the text fits into a growing trend for African leaders to resort to legal manoeuvres to cling on to power, and opposition leaders called its adoption a "coup d'Etat".

Clashes between security forces and Diallo supporters in the wake of the election have again proved deadly, with the opposition saying 46 people have been killed in a "wave of terror" while the government puts the toll at 21, including some gendarmes.

Diallo's UFDG party has published a list of names of the dead, including photographs of their corpses, matching its higher count, which comes on top of 90 people it says had already been killed since October last year.

Nevertheless, the opposition has said it will keep up the pressure on Conde with protests.

Although it harbours rich mineral and water resources, Guinea is one of the poorest countries in the world and has seen frequent bouts of political violence.

Its politics are mainly drawn along ethnic lines: the president's base is among the ethnic Malinke community while Diallo has strong backing among the Fulani people.

The opposition says that 46 people have been killed in a "wave of terror". By JOHN WESSELS (AFP)

A former opposition leader who suffered imprisonment and was even sentenced to death, Conde became Guinea's first democratically-elected leader in 2010 and won re-election in 2015, but he has been accused of drifting into authoritarianism.

He said last month that presidents being limited to two terms should not be a "dogma", but rejected accusations that he wanted to set up a "lifetime presidency".

Diallo, a former prime minister, has unsuccessfully challenged Conde in each election the president has contested.