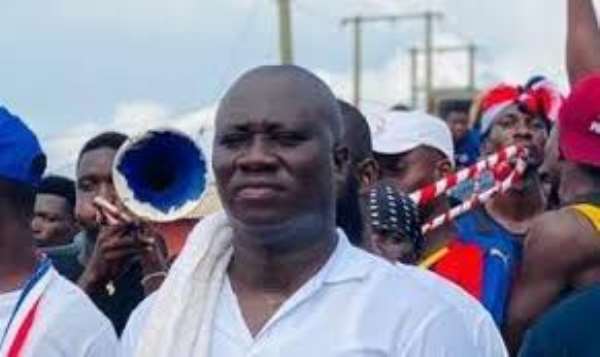 Two more suspects have been picked up in connection with the murder of the Mfantseman Member of Parliament Ekow Quansah Hayford.

Police prosecutors on Friday informed the Accra Circuit Court hearing the case against the suspects of the new arrests.

In court on Friday, Chief Inspector Emmanuel Haligah holding brief for the substantive prosecutor who is ending a week course today, Friday, told the court that two more persons have been arrested.

He said the charge sheet ought to be amended to include the two latest suspect, but the absence of the prosecutor means it has not been signed yet to be brought to court.

“The amendment has not been signed yet because of the absence of the substantive prosecutor, therefore, our prayer for a short adjournment is for the prosecutor to come and signed the amended charge sheet to be filed before the court,” the prosecutor told the court.

Starr News’ Court Correspondent Murtala Inusah reports that the latest information put the number of arrest at eight but details of the two were not given in open court.

The court presided over by Her Honour Evelyn Asamoah after listening to the parties adjourned the case to November 2, 2020.

On October 21, when the first batch of six appeared before the court, the prosecution said the lawmaker begged his alleged killers to follow him home for money because he had run short on cash.

“So they pounced on him and collected his Samsung galaxy 850 mobile phone and demanded money. The late MP told the robbers that he had used up all his money as he was returning from campaign tour. He, therefore, pleaded with them to take him to his house to give them money but they refused and shot him, killing him instantly,” Chief Insp. Frimpong told the court.

They have all pleaded not guilty to the charges of conspiracy to commit robbery and robbery contrary to the laws of the state. They have been remanded into police cells.

Brief facts of the case as presented to the court by Chief Inspector Seth Frimpong were that on October 9, this month police received information that armed robbers had mounted barriers at Abeadze—Dominase Mankesim road, robbed their victims and shot some of them.

According to him, among those who were shot happen to be the late MP who was identified after the robbery incident when police got to the crime scene.

He said upon receipt of information, police quickly mobilized men and proceeded to the crime scene but narrowly missed the robbers.

He said at the scene, police saw a number of vehicles parked on the road with some victims who had sustained various degree of gunshots wounds with one dead.

Chief Insp. Frimpong said the body was later identified as the Member of Parliament for Mfantsiman Constituency Ekow Quansah Hayford.

He told the court that, one Patrick Asante a Kia Truck driver and uncle Issah the late MP’S driver were seriously found injured and the police cleared the road to traffic and conveyed the victims to Winneba and Cape Coast Hospitals for medical attention.

The prosecutor told the court that the body of the deceased MP was also deposited at the Saltpond Mortuary pending autopsy.

He said police investigations revealed that the late MP for Mfanstman had filed his nomination form on October 8, for re-election and decided to visit four communities in the Taabosom Electoral Area – (Effukatwa, Opim, Takoradi and Duadzi. He told the court that, after having visited the communities with his campaign team, members of Yaw Berchie, Nuako, [email protected] Yaw, Stephen Atteh Allan, Frank Asiedu @ Okokorko Emmanuel W Bandoo and the driver, Uncle Issah were on their way back to Mankessim.

Let’s go to my house for money

Chief Insp. Frimpong said at about 1:00 am, the team bumped onto a gang of armed robbers who blocked the road between Abeaze Dominase and Duadze robbing motorists of their monies and valuable. He said the MP arrived with his campaign team onboard a Mutsibuishi pickup branded in NPP colours. The robbers immediately fired gunshots into the vehicle bursting the tires as the vehicle suddenly stopped after running into a ditch.

According to him, the robbers surrounded them and demanded for all their valuables while pointing a gun at Stephen Allan and asked whether he was the MP.

He told the court that, the MP himself owned up “so they pounced on him and collected his Samsung galaxy 850 mobile phone and demanded money. The late MP told the robbers that he had used up all his money as he was returning from campaign tour. He, therefore, pleaded with them to take him to his house to give them money but they refused and shot him, killing him instantly.”

He said “Police tracked the mobile phone of the deceased to Kumasi and arrested A2 at Aboabo in possession of the MP’s Samsung galaxy 850. A2 mentioned A1 as the person who sold the phone to him at GHc780. A2 led police to Akwatia line where A1 was also arrested.

Chief Inspector Frimpong said in the course of their investigations, the police traced the MP’s Samsung Galaxy 850 mobile phone to Kumasi Aboabo where they arrested Nasiru Fudailu who told police Alhassan Abubakar sold it to him at a cost of GH ¢ 750.

Fudailu, he said, led police to Abubakar at Kumasi Akwatialine. Where he ( Abubakar) was also arrested who also mentioned one Mohammed currently (at large’s) name as the one who sold it to him at a cost of GH ¢ 650. The court presided over by Her Honour Evelyn Asamoah remanded them into police custody to reappear on October 30, 2020.