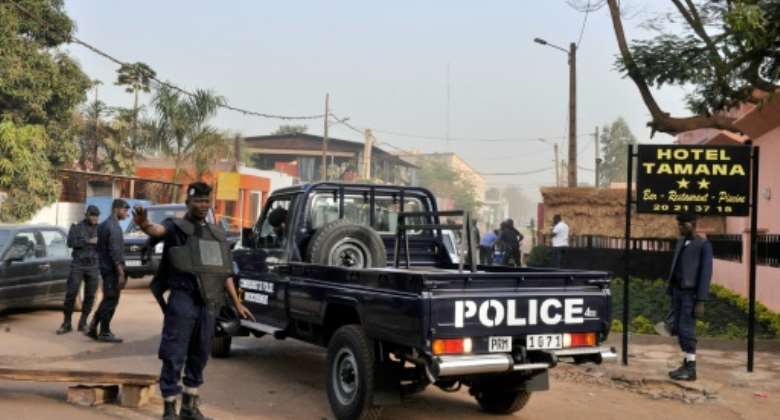 In March 2015, gunmen sprayed bullets at La Terrasse nightclub in the capital Bamako and tossed a grenade inside, killing five people. By HABIBOU KOUYATE (AFP/File)

Two jihadists were found guilty and sentenced to death by a Malian court on Wednesday for the killing of over two dozen people in attacks targeting Westerners in 2015.

The shocking attacks were among the first to explicitly target bars and restaurants popular with foreigners in Mali, which has been gripped by a brutal jihadist insurgency since 2012.

Fawaz Ould Ahmed, a Mauritanian Islamist also known as "Ibrahim 10", and his Malian co-defendant, Sadou Chaka, were handed the death sentences immediately after the verdict was read out at the end of two days of hearings.

A third defendant, Abdoulbaki Abdramane Maiga, also a Malian national, was sentenced to death in absentia.

Ould Ahmed had earlier told the trial that he had attacked a nightclub in the capital Bamako, killing five people, in revenge for cartoons of the Prophet Mohammed by France's Charlie Hebdo magazine.

Mauritanian jihadist Fawaz Ould Ahmed is accused of personally shooting the victims with an assault rifle. By STRINGER (AFP/File)

A Frenchman, a Belgian and three Malians were killed in the March 2015 attack, when gunmen sprayed the Terrasse bar and restaurant with bullets, one of two deadly attacks targeting Westerners in Bamako that year.

"We are the ones who carried it out, Al-Mourabitoun," said Ould Ahmed, referring to a prominent jihadist group in the Sahel.

"We are not ashamed, we are proud," he said.

"It was revenge for the prophet after what they did at Charlie Hebdo -- it's the photos, the caricatures."

He added: "And sadly, it's not over. It's still continuing," in an apparent reference to French President Emmanuel Macron's defence of the right to mock religion after a teacher was murdered near Paris for showing his pupils the cartoons.

Macron's comments have stoked anger in the Muslim world, with protests and boycotts of French product in a number of Arab countries.

The three defendents were charged both for the La Terrasse attack and for another assault in November 2015, when gunmen took guests and staff hostage at the 190-room Radisson Blu hotel.

Ould Ahmed, believed to be aged about 40, is allegedly a lieutenant of the notorious one-eyed Algerian jihadist Mokhtar Belmokhtar.

He is accused of personally shooting the victims at La Terrasse with an assault rifle.

Ould Ahmed said he went into the toilets at the club to don a hood and get out his Kalashnikov.

He described how he aimed at "white people" and gunned down one man in the back as the victim was attempting to run for his car.

The defendant said felt "nothing" when he fired his weapon, but apologised for the deaths of the Malian victims.

He said he was surprised he was able to return home by taxi without a hitch after the attack.

In January 2015, Islamist gunmen in Paris killed 12 people at the offices of Charlie Hebdo, a weekly satirical magazine, over the publication of the Prophet Mohammed caricatures.

Millions of people in France took part in demonstrations in support of the stricken publication.

Ould Ahmed, who is also accused of masterminding the Radisson Blu attack, was arrested in April 2016 by Malian police in Bamako, where he had arrived more than a week earlier to prepare further assaults, according to a source close to the investigation.

Flowers laid at the entrance to the Radisson Blu hotel in Bamako in 2015, in tribute to the victims of the deadly terrorist attack. By HABIBOU KOUYATE (AFP/File)

The trial in Bamako is a rare event in the Sahel, where weak and impoverished states are floundering in the face of a bloody jihadist revolt.

The insurgency in Mali first emerged in the north in 2012, before spreading to the centre of the country and from there to neighbouring Burkina Faso and Niger.

Wednesday's sentencing marked the first time the death penalty had been imposed in Mali in some 40 years.

The two men did not react to the verdict, according to an AFP journalist at the court.

Mamadou Diallo, one of the defense attorneys, said after the hearing that they would appeal to the Supreme Court.