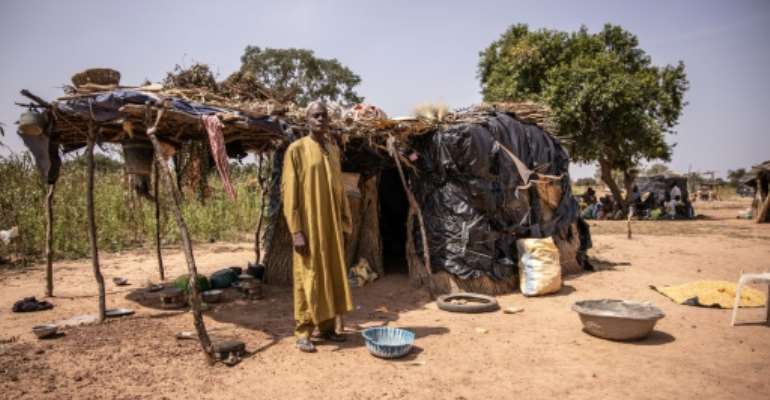 Rasmane Badini fled with his family from Silgadji following an attack by jihadists. By OLYMPIA DE MAISMONT (AFP/File)

Sleeping in huts made of straw, fabric and plastic sheets, nearly 5,000 people forced from their homes by jihadist violence in Burkina Faso have some shelter but little else.

The group faces a precarious future at Boulounga, 25 kilometres (15 miles) from the northern town of Kongoussi, as donor nations pledge more aid to the Sahel belt south of the Sahara.

The United Nations says the Sahel faces "one of the greatest humanitarian crises in the world". Earlier this month, it mobilised donor countries and institutions to step up financial aid, with promises of around $1.7 billion (1.43 billion euros).

"My dream is to have a real roof over the heads of my family and myself. Failing that, a good tent will do to protect us from bad weather, mosquitoes and creatures at night," says Rasmane Badini, 64, at the Boulounga reception site.

"Look at this hut. More than 20 children sleep inside." Badini opens a decrepit door to reveal an old mattress rolled up in a corner of the shelter.

Some charities provide tents in other camps, but Badini, who wears a long green African robe and a grey hat, says he has received nothing since he came to Boulounga 18 months ago.

The 4,600 people who took refuge in the area built makeshift huts in the fields.

"We make these huts with twisted mats of straw, pieces of wood we find and branches," he says.

Badini and his family fled their home in Silgadji after jihadists attacked it in May 2019 and killed about 20 people.

"We couldn't take anything with us and here we have no source of income," he says among a small group of men who have settled in Boulounga.

"It's hard to shelter everyone. We often have to sleep outside to make space for the children," he adds. There are 19 children in his family.

"Straw lets in the rain. That's why we cover the huts with pieces of plastic, and we have to build new huts every three to six months.

A latrine for displaced people. By OLYMPIA DE MAISMONT (AFP/File)

"What are we to do? We can't let the children sleep out under the trees."

Across the landlocked West African country, more than a million people fled districts targeted by jihadist bands, and fighting between communities has taken at least 1,200 lives since 2015, according to an AFP tally.

The Norwegian Refugee Council (NRC), an independent humanitarian organisation, estimates that 75 percent of internally displaced people in Burkina Faso have no decent place to live.

"Families are on the run from attacks, executions and kidnappings, children are killed and maimed by roadside bombs."

At Yabo, 70 kms from the capital Ouagadougou, families have stretched sheets of plastic between trees to create some cover.

The NRC is working to erect 7,000 tents at Yabo and other sites. "We are going to construct these tents ourselves, after benefitting from training and a gift of kits from the NRC, which then pays for our services," says Bamogo Nonsyande, 60, a project foreman.

Unlike these pupils in Ouagadougou, displaced children are lucky to have basic materials and some have lessons under the trees. By OLYMPIA DE MAISMONT (AFP/File)

He hails "the double benefit for the community," but most men have left to find work elsewhere.

"The men generally leave the women and go elsewhere to seek a job," says Sayouba Ouedraogo, who returned to Boulounga with school materials for his three children after spending several months as a labourer in Kongoussi.

"The village school has difficulty taking children in. There are between 80 and 100 pupils per class. Some have lessons under the trees," adds Ouedraogo, who wants to return to his village "to end this ordeal".

But with others still fleeing some villages, "our hopes are slim", he says.