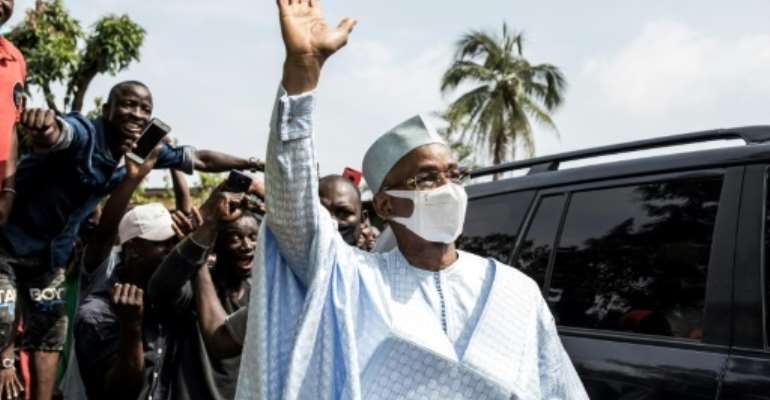 Opposition candidate Cellou Dalein Diallo, pictured in Conakry shortly before he declared victory a day after the elections. By JOHN WESSELS (AFP)

International mediators urged Guinea to lift a blockade of the home of its main opposition leader Tuesday, while the EU said there were doubts about the credibility of last week's presidential election.

The move triggered lethal clashes between opposition supporters and security forces across the West African nation of 13 million people.

Twenty-one people died in the post-election violence, the government said, although the opposition put the number of dead at 27.

In a statement on Tuesday, the representatives said they had come to "lower sociopolitical tensions" after the disputed election.

They added that they "regretted the loss of human life," urged Guinea to investigate and bring the perpetrators to justice, and called on all parties to engage in dialogue.

The European Union's foreign policy chief Josep Borrell on Tuesday said he supported the mission, and pointed out that doubts over the election's credibility remain.

Alluding to Diallo, he said that "all actors" must be allowed freedom of movement and expression.

"It is also important that the means of communication, in particular access to the Internet, be guaranteed in all circumstances," Borrell added.

Internet connection was severely disrupted during the clashes last week. Web-monitoring groups have accused the government of being responsible.

However internet services appeared to have to returned to normal on Tuesday, AFP journalists reported.

Much of the turbulence in the poor nation of 13 million people centres on the third presidential term for Alpha Conde, whom opponents accuse of drifting into authoritarianism.

He pushed through a new constitution in March which he argued would modernise the country.

But it also allowed him to bypass the normal two-term limit for presidents, arguing that the counter had been reset to zero.

That decision provoked mass protests from October 2019, in which security forces killed dozens of people.

Conde, who spent decades in exile as an opposition activist, became the former French colony's first democratically-elected leader in 2010, and won re-election in 2015.

Critics accuse him of veering into authoritarianism, however, and of stubbornly refusing to investigate killings committed by his forces.

Guinea's politics are mainly drawn along ethnic lines: The president's base is among the ethnic Malinke community while Diallo has strong backing among the Fulani people, also known as Peul.