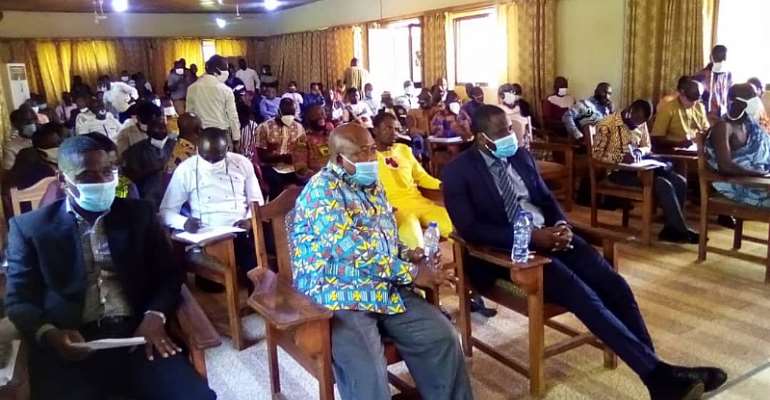 Participants At The Hearing

The Atebubu-Amantin municipal assembly is set to raise a total of two million Ghana cedis GHC2,000,000.00 as internally generated funds for the 2021 fiscal year.

This came to light at a budget hearing in Atebubu at which four other districts namely: Sene East and West as well Pru East and West also presented their budgets.

According to the Atebubu-Amantin municipal budget analyst Mr. Festus Bukroh, 25% of the amount will be applied to the payment of the cost of some capital projects in the municipality namely: the completion of a court complex in Atebubu, supply and installation of streetlights in Atebubu, completion of a mortuary project and female ward at the Atebubu government hospital and the opening of some town roads in Atebubu.

The assembly projected the same amount last year but could only raise one million, one hundred and six thousand, eight hundred and sixty cedis and nineteen pesewas GHC1, 106,860.19 representing 55.34% of the estimated revenue due to the covid-19 pandemic which adversely affected businesses in the municipality.

In all, the assembly expects a total revenue of ten million, six hundred and twenty-four thousand, one hundred and seventy-eight cedis and sixty-six pesewas GHC10,624,178.66 for the period made up of grants, compensation of employees, district assemblies common fund, district development fund, people with disability fund and the MP’s common fund among others.