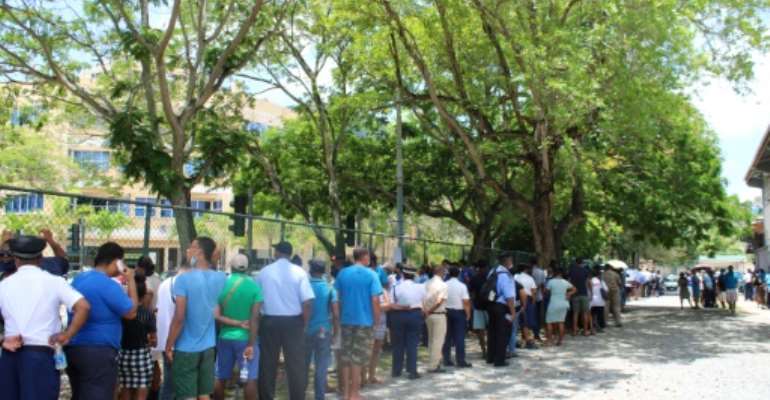 Most Seychelles voters will cast their ballot Saturday in presidential and parliamentary elections spanning three days across an idyllic archipelago that has been economically hammered by the coronavirus.

Polling stations will open at 7:00am (0300 GMT) on Mahe, Praslin and La Digue -- the three main islands of Seychelles, home to the majority of its 74,600 voters, with the rest living on further-flung territory of the Indian Ocean nation.

Voting took place Thursday and Friday on a few dozen of these outer islands, mainly for employees of hotels or the island management authority, who attended pop-up polling stations with election material carried by plane or boat. Some on the main islands deemed essential workers, such as hospital and nursing staff, also voted Thursday.

The opposition, narrowly defeated in a presidential election in 2015 and buoyed by a landmark victory in a parliamentary poll a year later, is hoping for its first presidential win in the 40 years since Seychelles independence.

It is up against the incumbent Danny Faure, 58, who is running under the recently renamed United Seychelles ruling party which has been in power since 1977.

The main opposition parties did not manage to unite and Faure -- who was not elected but took over after his predecessor James Michel resigned -- faces two challengers.

His main rival is the Anglican priest Wavel Ramkalawan, who is taking his sixth shot at the presidency and lost by only 193 votes to Michel in an unprecedented second round of voting in 2015.

He is the candidate of the Linyon Democratik Seselwa (Seychelles Democratic Alliance) opposition party, the majority party in parliament after winning 19 of 34 seats in the last election.

The other candidate is Alain St Ange, who was in the opposition before joining the government as tourism minister from 2012-16, but switched back and is now running under the flag of a new party, One Seychelles.

The campaign took place mainly over social media, with rallies banned due to the coronavirus.

The Seychelles has recorded only 149 cases, mostly imported, but the pandemic has been a burning campaign issue as restrictions on global travel bottom out the tourism industry -- a major earner for the Seychelles and employer for many of its 98,000 people.

Visitor numbers have collapsed since March in the archipelago nation of 115 islands, normally a popular destination for honeymooners and paradise-seekers wanting fine sandy beaches and turquoise waters.

The economy has slowed significantly since the start of the pandemic and unemployment has risen from 4.8 to 6.3 percent, according to government figures.