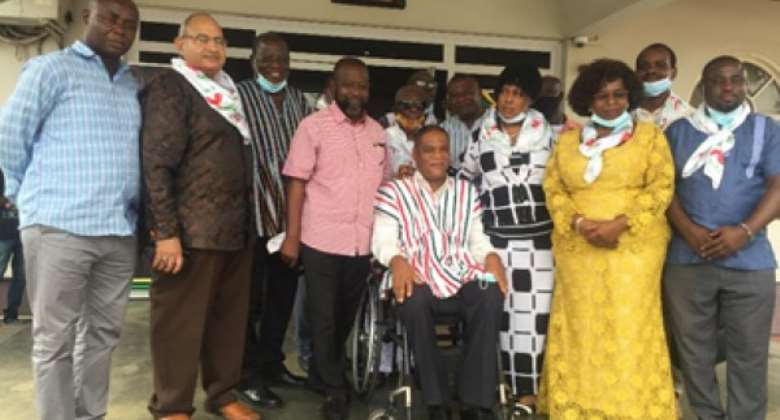 The Asantehene, Otumfuo Osei Tutu II, has called on the leadership of the Convention People's Party (CPP) to work hard to revive the party to become a force to reckon with in the country's political dispensation.

He said the forebearers of CPP worked extremely hard to position it as a political force, which later gained independence for Ghana.

It was now time for the present generation of the party to continue and worked assiduously to come together as a unified force to reclaim its past glory to reclaim political power in the country.

Otumfuo Osei Tutu made the call when the flagbearer of the CPP, Mr Ivor Kobina Greenstreet, led a party delegation to call on him at the Manhyia palace in Kumasi.

The visit was to introduce himself to the Asantehene and seek his blessings and guidance, as he embarked on a three-day campaign tour of the Ashanti region to interact with party supporters and sell the CPP message to the electorates to help win the 2020 elections.

Otumfuo Osei Tutu also charged the leadership of the party to work to deliver on its campaign promises when the party won the December 2020 elections.

Mr Greenstreet on his part, said the CPP was the only party, which worked to transform the country after the colonial rule and created employment opportunities for Ghanaians.

The party was on course to come back to redeem the people, especially the youth from the present state of joblessness and create opportunities that would offer hope to many Ghanaians.

Mr Greenstreet said the NPP and NDC times were over, and it was now time for the CPP to take on the mantle of leadership of the country.

“NPP and NDC have done theirs, but now is time for change, and that change can only be CPP.

We are number four on the ballot paper and we are going to communicate these things with the people on our visit”, he emphasized.

He said the CPP stood for peace and truth in all its dealings with the electorates.

“We come in peace and truth. The people have seen so many empty promises, so it's time for them to understand that only one party, that's CPP can change their lives”, he added.

Mr Greenstreet said CPP was formidable in the Ashanti region and with the blessings granted by Otumfuo Osei Tutu, the party would make great inroads in the region to claim the presidential seat in December 07.