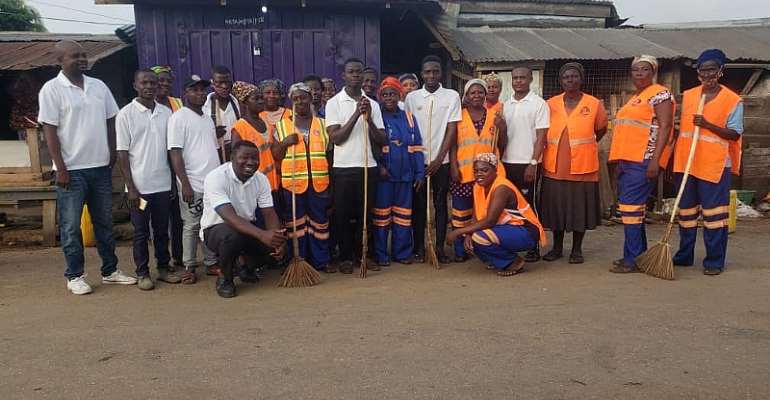 It has been two years since the inception of the Nation Builders Corps (NABCO). The program was rolled out as one of the flagship programs by the Nana Addo-led government to address the problem of graduate unemployment in the country.

The program has trained a number of trainees who have developed several employable skills.

Nation Builders Corps (NABCO) trainees in Atiwa East as part of its 2 years anniversary organised a clean up exercise in Anyinam. Trainees joined Zoomlion to clean up areas around the market area.

The NABCO coordinator for the district, Mr. Samuel Nketia explained that, the programme was committed to ensuring that trainees contribute to the society and help the fight against Covid-19. He noted that trainees have contributed liquid soaps they prepared themselves early on to clinics and CHIPS compound in the district.

Trainees invested brooms and liquid soaps to Zoomlion and promised to add shovels to help in the waste management situation in the district.

Workers of Zoolion in the district were glad for the alliance that made the cleanup exercise successful. They thanked trainees for the donations and expressed how useful the donated items were to them.