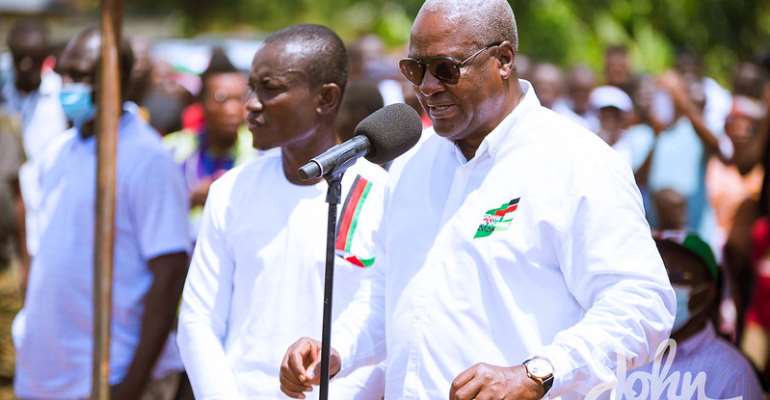 Former President John Dramani Mahama has assured aggrieved customers of Menzgold Company Limited that he will retrieve their locked up cash for them.

Mr. Mahama said his stance was in stark contrast to the Akufo-Addo administration’s which had let the Menzgold CEO, Nana Appiah Mensah off the hook.

Following an order from the Securities and Exchange Commission (SEC) to suspend aspects of its operations in 2018, Menzgold has since struggled to pay its customers their monies.

Mr. Appiah Mensah was accused of running a Ponzi scheme.

“The man who took the money is there unbothered. When the Menzgold customers say they are going to demonstrate, police are sent to stop them,” Mahama said on his campaign tour in the Tarkwa Nsuaem constituency on Tuesday, October 20, 2020.

He assured that an NDC government would ensure the Menzgold customers were paid back their money.

“God willing the NDC government will come and when it comes, we will look into the Menzgold issues. Those who took your money, we will chase them, retrieve the money and share it to you,” he said.

Mr. Mahama was well-received by some Menzgold customers in Tarkwa on Tuesday.

In July, he said an NDC government would pay all persons who have funds locked up with the collapsed financial institutions within one year.

“We shall not put up any long-term payment plans that will further worsen the living conditions of the victims,” he said.

He also said the NDC would establish a Financial Services Authority “that will be responsible for ensuring that consumer financial markets work for consumers, providers and the economy as a whole.”

The Authority is intended to oversee all financial products and services that are offered to consumers.

Mr. Mahama said the authority will “effectively and efficiently prevent and stop the challenges that have confronted customers of Menzgold, DKM among others.”