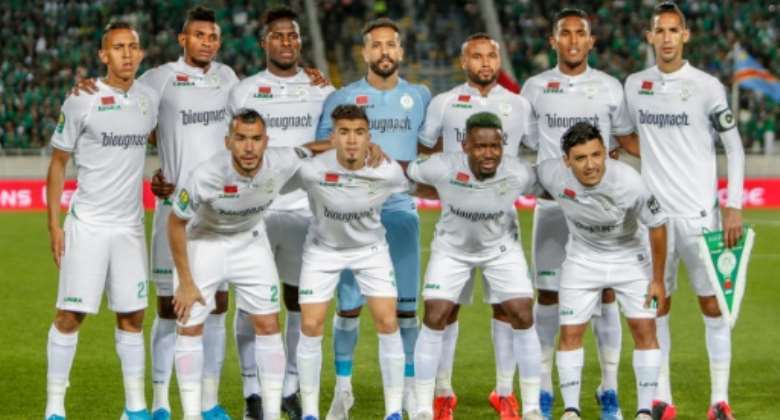 Raja Casablanca will be unable to fulfil a CAF Champions League fixture in Egypt this Saturday due to a coronavirus outbreak affecting eight players.. By STR (AFP)

Moroccan club Raja Casablanca said Wednesday that they cannot travel to Egypt for a CAF Champions League semi-final against Zamalek this weekend after eight of the squad tested positive for coronavirus.

"The Moroccan authorities have withdrawn the special authorisation given to the club to travel outside the country," an official told AFP.

Raja, who lost the first leg 1-0 at home last Sunday, were due to play the return match at the Cairo International Stadium this Saturday.

Four of the Raja team that started against Zamalek -- defender Ilias Haddad, midfielders Omar Arjoune and Mouhcine Moutouali and forward Abdelilah Hafidi -- are among those who tested positive.

Celebrations after Raja this month became Moroccan champions for the first time in seven years have been blamed for the Covid-19 outbreak.

The 26-year-old will compete with former South Africa shot-stopper Wayne Sandilands, who is 11 years older, to be first choice.

"A big thank you to this gentleman. He is a magician and thanks to his vision Algeria have become a force to reckon with," said the 2016 African Footballer of the Year.

Reigning African champions Algeria beat Nigeria and drew with Mexico this month to extend their unbeaten run to 20 matches since October 2018.

Siphiwe Tshabalala, scorer of the first goal at the 2010 World Cup hosted by South Africa, has joined top-flight club AmaZulu at the age of 36.

The midfielder spent 11 years at Kaizer Chiefs and one season with Turkish club Erzurumspor before returning home to join the Durban club.

Desperate to shed their perennial tag of relegation candidates, AmaZulu have signed 10 players, including Tshabalala and Zambian forward Augustine Mulenga.

He recently left Russian club Arsenal Tula in the twilight of a professional career that began in 2005 and also took him to France, Spain and Turkey.

The centre-back was a pivotal figure in the rise of Burkina Faso from African also-rans to a nation ranked 11th in the continent this month.

Club president Mortada Mansour has rewarded the Zamalek squad with a $3,200 (2,800 euros) bonus each after a 1-0 away win over Raja Casablanca of Morocco in a CAF Champions League semi-final first leg.

"Each player will receive the same amount as a bonus if they win the return match," promised the larger-than-life official.

Mansour added that a much bigger bonus will be offered if Zamalek go on to win the elite African club competition for the first time in 18 years.

After playing three internationals in five days this month, Zambia will embark on an even more punishing programme this week with four matches in five days.

The Chipolopolo (Copper Bullets) will be based in Addis Ababa and face hosts Ethiopia and South Sudan twice each between Thursday and Monday.

Zambia are also preparing under Serb coach Milutin 'Micho' Sredojevic for home and away 2021 Africa Cup of Nations qualifiers against Botswana next month.