Why Ɛʋɛ Will Still be Indigenous to Ghana Even if Volta Separates. 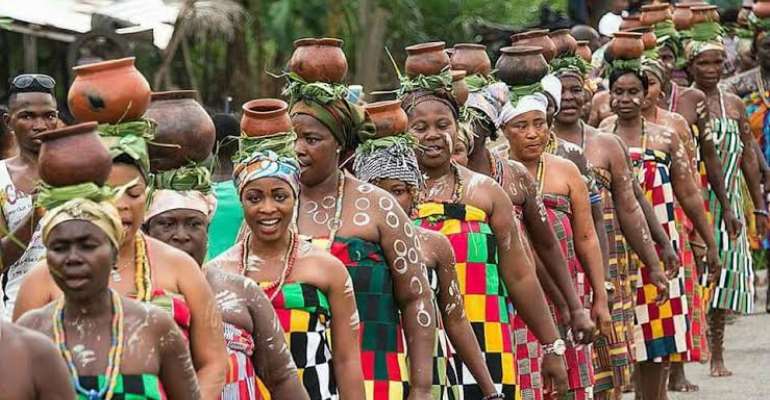 The Ɛʋɛ people are part of Gbe speaking group made also of the Ga_adamgbe group. These groups co exist in mainland Togo and have been brotherly people who intermarry. And that is where the name Ayigbe came from.

Ayi gbe simply mean Ayi has refused. Ayi is not an Ɛʋɛ name. Ayi Kushi according to historical narratives is the founder of the Ga state in Ghana. He had a brother who during their migration stopped at Anexo and settled with the Ɛʋɛ people there over a while he integrated so well with the Ɛʋɛs that when his brother Ayi Kushi asked that he join him in Accra. The Ayi sent message through the Ɛʋɛ people to be delivered. So these Ɛʋɛ messengers came and told Ayi Kushi and his elders that his brother Ayi who has settled in Anexo Togo has refused to bring his stool and join them in Accra. They simply said Ayigbe. So Ayigbe is not a name for Ɛʋɛ people.

That is just by the way but When one crosses the Volta lake towards the West from Anlo he enters Adangbe territory. And that was how is it and was. We were close.

Since leaving Notse the Ɛʋe people decided never to concentrate power in the hands of any one chief of village. And this is why unlike our Fon brothers who maintained their Benin Kingdom until the French invasion we on the other hand just migrate in small groups as villages, family etc. And settled wherever we please but had connection with a bigger group that we could call upon in times of war or difficulty. The Ɛʋɛ people therefore were like nomads but with a place they can return to.

The fishermen among the Ɛʋɛ people also travel along the coast to wherever they could settle or find a good catch. It was one these fishing escapades that gained the Aflao people the Godigbe festival(lets talk about it another time).

The Ɛʋe people have settled in places from Ada through Tema, Accra to the Central region, Western and their settlements dating back to pre colonial times can be found in Ivory coast and beyond .some of these settlements might be less than 120 years but the chunk of it including the settlement called Anloga in Kumasi are over 150 years old. And the land was a reward for valour and so it belongs to the Anlo people who passed it on to those who live there with some integrating.

So let us not assume that the Ɛʋɛ people are a single group of people found between the Volta river and the Mono river only, they have moved and spread abroad within the then mainland Goldcoast and beyond even before the British began to think of adding the Volta region.

Statistics have it that more the 60% of Ɛʋɛ live outside the VR so just to digress the NDC might actually be benefitting from mainly Ɛʋɛ groups living out side Volta but would be imaging that those regions are changing their voting pattern.

[Video] I joined #FixTheCountry demo because my Church membe...
15 minutes ago