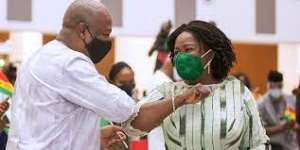 I didn't need to write this for anyone to get the picture.

Once upon a time the country Ghana was formed. Many people played many different roles. Yet all we heard about was the big six (till date I am not even sure what made some of them big). Growing up and learning about Ghana's History through School, I hardly heard of the likes of Gbedema, Dr. Raphael Armattoe, and people like that.

I later in life began to hear about coup d'etats and that was where I picked up the names, Gen.Kotoka, Harley, Deku and others of the National Liberation Council. These people had taken over the country in the first coup d'etat recorded in the country.

But in the general elections that will follow, Komla Agbeli Gbedema who could win a parliamentary seat for Dr. Kwame Nkrumah whilst the latter was in jail, only managed a little more than 30% in total valid vote count. Yes! such an astute politician managed only 30 per cent. Don't forget he lost to a man who will later consider Evhe(Ewe) people as aliens. And since then Evhe(Ewe) only became Ghanaian again after a series of Coup d'etats.

We eventually reached a fourth republic.The NDC and NPP were formed. Somehow the NDC seemed to be the party for the minority ethnic groups in the country. The NDC represented the only real hope for a man from Sandema to become a president of Ghana. If such a party had existed when Komla Gbedema contested for president, I doubt he would have made just 30%.

Though it is not written that akans should vote for the NPP when they grow they do that anyway. Somehow, the minority ethnic groups also try to make sense of voting for a party that comprise of the minority groups in the country.

Lately, my observation is pointing to a gloomy picture of the nature of our politics. We will all agree that democracy is a game of ideas, where the man with the superior idea is expected to win. However, where it becomes clear that tribalism rather than having superior ideas is the reason why people vote, what do we do?

The recent leadership of the NDC is dominated by Akan tribesmen, the same group that dominates the NPP. Obviously, this did not have happen because only Akans have superior ideas but could have occured because Akan delegates are dominated the voter register. Anyway, let us just assume that the Akans in the NDC did not vote on tribal lines, but voted the people with superior ideas, which is why they chose Former President Mahama who is not Akan.

This assumption however, came down crushing when Mr. Mahama picked his running mate in the person of Professor Jane Naana Opoku Agyemang. Prof. had achieved what she could in her field of endeavour. I however, cannot agree that she is the only or even the most competent in the NDC to be a running mate. I want to agree that her Akan name and ethnicity was very much considered. Mr. Mahama might be thinking that her Akan identity would encourage akan voters to vote for the NDC thereby reducing the votes going to the main Akan party, the NPP. But I think he did a terrible thing.

What Mr. Mahama didnt realize was that he was helping entrench Akan privilege and institutionalizing Akan tribalism. The very thing that the NDC needs to move away from. If Mr. Mahama genuinely chose Prof. Agyemang because of her performance in government, which special performance did she put up that the Ga, Evhe (Ewe), or the other minority groups represented in the NDC did not seem capable of? On any day one can find a professors from any region or big town in this country. By now we all already know how Professor Mawuse Avoke was removed from University of Education Winneba. It is no more a secret that where an individual comes from now plays a role in whether he/she will become a vice chancellor of a public university or not. Clearly there is no equal opportunity of all in this country.

Base on this brief narration, if Mr. Mahama chose Prof. Jane Naana Opoku Agyemang simply because she was once Vice Chancellor of a University situated in her region then that cannot be enough reason. Because even now, not every region can boast of a public university. This means those professors with no university in their home regions might suffer the fate of Prof. Mawuse Avoke.

The fact is that, the Akan people will always vote for their Akan political party (NPP) no matter how terrible the presidential candidate is. Choosing an Akan candidate for NDC will not change the Akan voting pattern. Even the "Angel" Prof. Mills of blessed memory did not change that, and I do not see that being changed by any mortal. My worry however, is that by having Akans always making a presence as president or Vice in the two major political parties simply because of their tribal affiliation defeats the fight against tribalism.

What it does is that it gives the akans a false sense of superiority. Relegates the other ethnic groups to the background and makes tribalism instead of progressive ideas the focus of our politics.When I first posted this article on Oprah News Hub, a lady from the Northern part of Ghana lamented that a cousin of hers in Europe was asked to speak twi as proof that she was Ghanaian at the Ghanaian embassy in that country before she was helped by a staff there. Is this the kind of nation we are building? A nation where akan tribalism is being institutionalised and where everyone else except Akans, know that there is a sort of Akan privilege.