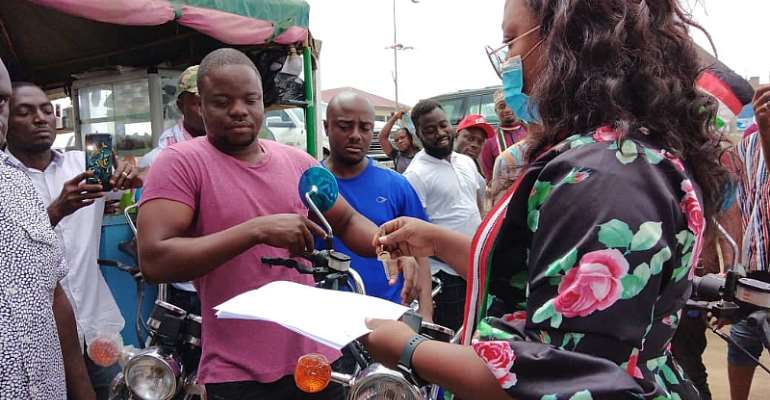 Parliamentary Candidate for the National Democratic Congress (NDC) in the Awutu Senya East Constituency, Phyllis Naa Koryoo Okunor has presented three motorbikes to victims of the shooting incidents during the voter registration exercise in the constituency.

Hon. Hawa Koomson fired gunshots at the Step to Christ registration centre at CP Electoral area in the constituency during the voter registration exercise amidst beaten, by at least 15 hoodlums allegedly from her camp, set ablaze three motorbikes and dismantled mobile phones of some electorates.

The Parliamentary Candidate, Phyllis Naa Koryoo is however demanding justice be served and the perpetrators brought to book.

Eyewitness accounts revealed that prior to the incident, the Hon. Member in a car was accompanied by bodyguards arrived at the registration centre and demanded anyone not part of the registration exercise should move away.

Hawa Koomson who doubles as the Minister for Special Development Initiatives confirmed the shooting but claim she fired the gunshot in self-defense.

Victims of the motorbikes reportedly rely on the motorbikes for commercial purposes popularly known as Okada in the constituency. However, three months after the incidents, justice is yet to be served.

Speaking, she said, the police administration is handling the case with kids gloves.

She stressed, that after severe mayhem perpetuated on the people of Kasoa by hoodlums accompanied by the MP, the posture by the police administration suggests unwilling desire to apprehend the perpetrators.

She said subsequent follower ups to the national CID headquarters to demand justice for the victims has proved futile.

"...Now, we have followed the case even up to the CID headquarters in Accra but nothing has been done."

Moving in to the heat of the campaign, she pledged her support towards peace in the constituency before, during and after the December 7 elections, however will resist oppressive conducts in all forms.

The Crime Officer who was in charge of investigations in the shooting incident involving the minister has been transferred from the Central Region to the Eastern Region.

Chief Supt Mr Reuben Asiwoko who was in charge of Regional Crime in the Central Region information available indicates was determined to investigate the matter to prosecute perpetrators. But the case was subsequently transferred to the National headquarters and the CID transferred.

The act received massive condemnation from the public, with many calling for her resignation and subsequent prosecution.

Security experts, religious organizations including the Christian Council as well as neutral observers like the National Peace Council called for her resignation or dismissal, however, President Akufo-Addo in a sweeping statement, only said the Police Service must deal decisively with those involved in the violence.

The central regional branch of the National Peace Council further requested to be served with the report on the case but to no avail.