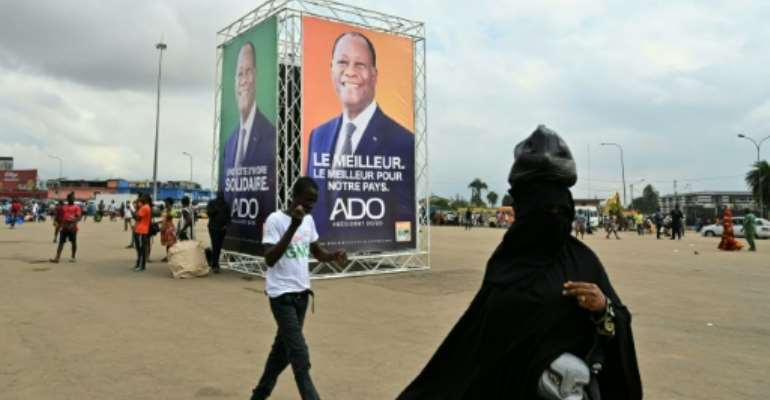 In the vote on October 31, Ouattara,78, is controversially seeking a third term, contested by the opposition who are calling for a campaign of civil disobedience and have said they will boycott "the electoral process" without pulling out of the race completely.

"The opposition are afraid of going to the polls. They know Ado (Alassane Dramane Ouattara) is the best candidate," the leader said.

Earlier in the day, Ouattara had spoken before some 500 traditional chiefs in the region.

"With a few weeks to go before the elections, I hear people saying that dialogue is needed," he said.

"Dialogue for what? We have institutions and these institutions have decided there will be four candidates and I can tell you here in Bouake that I will continue to go to other regions in Ivory Coast to preach the good word."

While Ouattara insisted that the country is "not in crisis", many observers fear a crisis may be sparked comparable to campaign in 2010-2011 when 3,000 people died and the West African nation was plunged into chaos.

The constitutional council rejected a further 40 would-be candidates including ex president Laurent Gbagbo, 75, and former rebel leader Guillaume Soro, 47, both of whom played key roles in the crisis that engulfed the country after disputed elections in 2010.

After his re-election in 2015, Ouattara announced in March that he would not seek a third term.

On Friday, the opposition reiterated its call for civil disobedience.

There were a number of incidents in the capital Abidjan and elsewhere, where demonstrators blocked roads.