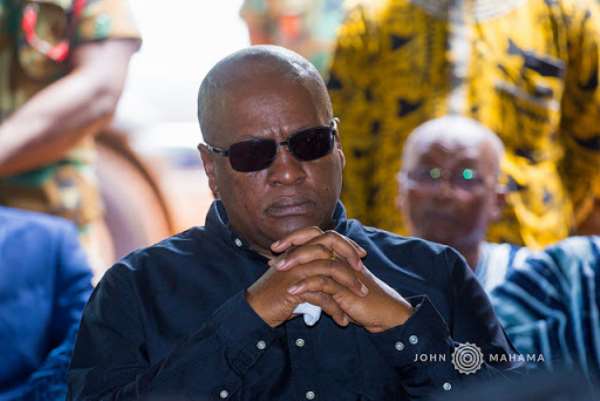 Former President John Dramani Mahama, on Thursday, 15, October visited the family of the killed Member of Parliament for Mfantseman to console them.

Mr Mahama, who condemned the killing, expressed the hope that the killers would be apprehended and made to face the full rigours of the law.

Mr Ekow Hayford was shot dead by unknown gunmen on the Abeadze Dominase–Abeadze Duadzi–Mankessim road a week ago.

He was returning from a campaign trip with some constituency executives of the ruling party when armed men stopped the vehicle on which they were travelling at a roadblock the robbers had mounted and shot him dead.

Paying tribute to the murdered MP, Mr Mahama said even though they belong to different political parties, they share common humanity and are all working in the interest of Ghana.

"We, therefore, want to express our condolences to the bereaved family and it is an occasion for sadness.

“It is also a call to us as leaders to make sure that our people are safer", he said.

Mr Mahama backed the calls for MPs to be provided with armed guards for protection, while the government works toward making the country safer for all Ghanaians.

For his part, the head of family of the late MP, Nana Kojo Nkrumah, expressed the hope that ongoing investigations into the death of their relative will uncover those behind the crime.

He also urged the government to help fight the rising incidence of crime in the country.

JHS graduate appeals for $45,000 to undergo kidney surgery
58 minutes ago