Tensions as suspects in S.Africa white farmer murder in court 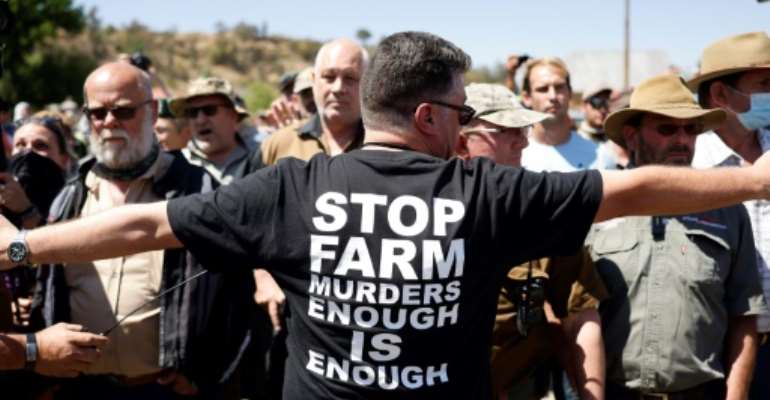 A man holds out his hands to control a group of farmers gathering outside the court. By Marco LONGARI (AFP)

Emotions ran high on Friday as two black suspects appeared in a South African court over the murder of a white farmer which has sparked racial tensions.

A barbed wire fence ringed the court house in the central town of Senekal and police and a water cannon were deployed as opposing groups of white farmers and black activists gathered near the site.

Around 2,000 supporters of the radical leftist Economic Freedom Fighters gathered for eight hours under scorching heat for a protest.

Crime in this sleepy but rich farming area, 300 kilometres (180 miles) south of Johannesburg, is centred mainly around stock theft, which farmers say is rampant. Murders are relatively rare.

But on October 2, the body of 22-year-old farm manager Brendin Horner was found. He had been strangled and tied to a fence at a farm in Paul Roux near Senekal.

A silver cross with his name engraved on it has been erected at the spot where the body was discovered.

The killing of white farmers is a highly emotive issue in South Africa. Some conservative groups claim that farmers are victims of a genocide and the government is not doing enough to protect them.

"This young man is paying with his life, he is going to help us solve the (crime) problem," Horner's employer Gilly Scheeper, 58, said in reference to the attention brought to the case.

Scheeper has hired private investigators to run a parallel probe into the death "because police here are corrupt".

The motive for the murder has not been established, but a police officer who is investigating the case said the farmer's wallet went missing after the attack.

Security was strong at the courthouse where two suspects in a white farmer murder appeared. By Marco LONGARI (AFP)

A dozen policemen guarded the court house on Friday, dressed in bulletproof jackets and armed with assault rifles. Elsewhere around the court's precincts, police patrolled in cars and from a helicopter.

The two suspects -- Sekwetja Mahlamba, 32 and Sekolo Mlatlaletsa, 44 -- wore grey jerseys as they appeared for their bail hearing.

One of them has previously been arrested 16 times and convicted four times for stock theft and housebreaking.

"I don't think that they should get bail because of the seriousness of the offence," investigating police officer Gerhard Peter Myburgh told the court.

"This incident has also caused unrest in Senekal to such an extent that there were people who tried to remove the suspects from court," said Myburgh.

The suspected killers' bail hearing will continue on October 20.

He said the rape and murder of women and children were crimes that deserve special attention, "not the privileged white old racists who are unable to adjust to the new conditions".

"Now they must accept that they are going to be equal to those that they used to call monkeys."

A member of the Economic Freedom Fighters confronts farmers in Senekal. By MARCO LONGARI (AFP)

While waiting for Malema to address them, EFF supporters had a stand-off with another group of white farmers who staged a vigil just a 100 metres away.

Later some of the farmers were pelted with rocks and water bottles while trying to ride away on motorbikes.

"Killings on farms are not ethnic cleansing," he said in a weekly newsletter. "They are not genocidal. They are acts of criminality and must be treated as such."

South Africa, where white minority rule and apartheid only ended in 1994, has one of the world's highest crime rates.

Dozens of other white farmers and supporters gathered about a kilometre away from the EFF rally. EFF supporters driving past the farmers hurled insults at the group.

"We are not going to be fear-mongered. We need to protect our farmers. It's not just a normal crime. These are vicious...attacks," said Debbie Els of the Stop Farm Murders Movement.

"We are not going to stand for it anymore, we need to fight fire with fire."

[Video] I joined #FixTheCountry demo because my Church membe...
7 minutes ago