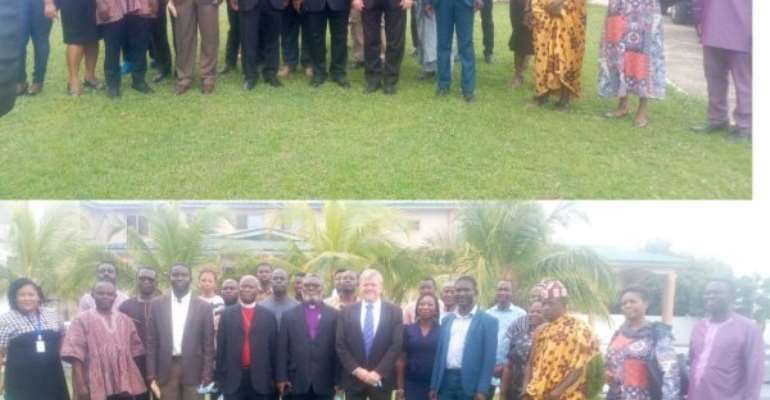 The National Peace Council (NPC) has called on political parties, civil society organisations, and the media to sensitise the public on the “Roadmap to Eradicating Political Vigilantism” and sanctions against vigilantism acts.

Vigilantism is an act or threat of violence or intimidation undertaken by a person to further the interest of him or herself or another.

Reverend Dr. Nii Amo Darko, the immediate past Board Member of the NPC, who made the call on Thursday at a day's advocacy campaign programme on the eradication of vigilantism and related offences in Kasoa, said the “Vigilantism & Related Offences Act 2019 (Act 999)” was going to 'bite' anyone or group which was found culpable.

The Act passed in 2019, states that a person shall not directly or indirectly form, organise, operate or promote the formation or operations of a vigilante group.

Any person who contravenes the provisions, including taking part in the activities of vigilante groups, commits an offence and would be liable on conviction to a term of imprisonment of not less than ten years and not more than 15 years.

The Act also holds anyone or group armed with an offensive weapon liable on conviction to a term of between 15 to 25 years imprisonment and such perpetrators would also be disqualified from holding public, political or political party office until at least ten years had elapsed from the date of conviction or after end of sentence.

Dr. Darko, who was speaking on the “Roadmap to Eradicating Political Vigilantism in Ghana,” said the NPC was monitoring to ensure that all political parties and stakeholders complied with the roadmap developed by the Council and stakeholders to promote peace and security before, during and after the general election.

He explained that the roadmap identified specific actions and consequential tasks, some requiring advocacy, administrative remedies and others in the form of legislative reform, and made recommendations to various stakeholders, including political parties, the Government, the National Commission for Civic Education, and the Electoral Commission.

Dr. Darko noted that the drivers of political party violence were many and fundamentally interrelated.

They include mistrust of Security Agencies and the Electoral Commission, mutual mistrust between the major political parties, the National Democratic Congress and the New Patriotic Party, political patronage and the culture of rent-seeking, Ghana's youth bulge and unemployment, and the 'winner-takes-it all' politics.

To guide political parties to adhere to the directives of the roadmap, he said, a Code of Conduct was developed, which demanded that political parties publicly denounced any act of vigilantism when perpetrators were directly connected to their party, and encourage vigilante group leadership to disband such groups, among others.

Mr George Amoh, Executive Secretary of the NPC, said political parties had agreed to work within the structures proposed in the Code of Conduct, and through other lawful means, to ensure the eradication of political vigilantism in Ghana.

Mr Michael Yaw Essuman Mensah, the Municipal Chief Executive of Awutu Senya East, said peace was priceless and could not be replaced.

Politicians, he said, did not think about repercussions of acts they indulged in just to attain power, adding that, it was unfortunate how they illegally employed the services of poor youth to perpetrate in their interests.

He said it was important that politicians became the starting point of the campaign against vigilantism and called on the media to support the worthy plan.